Durga Puja. The very name sounds musical to the ears of any Bengali. The festival, which celebrates the worship of the devi Durga, is synonymous with clear blue autumnal skies, white fluffy clouds, bright sunshine, and fields full of kash phool. The festival also signifies a long holiday: to the Bengalis that stay in Kolkata, far-away places beckon them; while the Probashi Bengali (those residing outside Bengal) more often than not find themselves homeward-bound.

Bengalis love travelling, and what is better than to travel during the Durga puja vacations, to see far off places, when the sky is overwhelmingly blue and the sunshine so inviting

Historically, the autumnal Durga Puja, so dear to the Bengalis, is not the traditional form. The traditional one, as dictated in religious scriptures, is celebrated in the month of Chaitra (March or April), and is better known as Basanti Puja. According to folklore, Lord Ram invoked the devi and worshipped her just prior to his battle with Ravana. Pleased with his offerings, devi Durga blessed Rama, and gave him the secret to slay Ravana. It is for this reason in Bengali the puja is termed as Akaal Bodhon, which means devi Durga is called forth at a wrong time of the year. While the festival consists of a 10-day celebration pan India and is known as navratri, the Bengalis  celebrate the last five days only, when as the myth goes, the devi comes to visit her parents who reside on Earth; so it is also the celebration of a daughter’s homecoming. The days of festivities are as follows: Maha Shashthi, Maha Saptami, Maha Ashtami, Maha Navami and BijoyaDashami. These five days celebrate the defeat of evil in all walks of life. 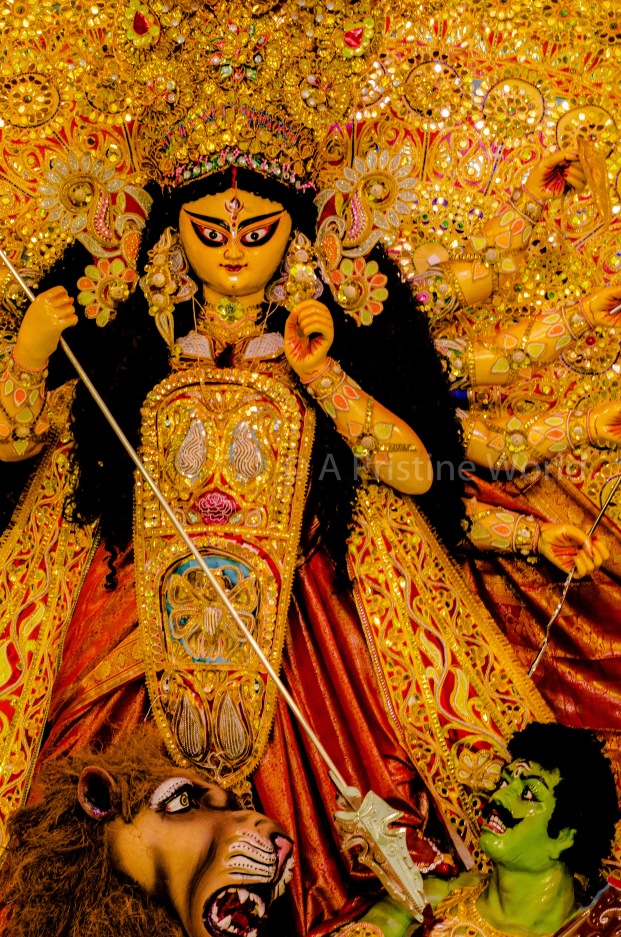 Celebrating the triumph of Good over Evil

This annual festival, celebrated worldwide wherever Bengalis reside, involves months of preparation that starts with the creation of the goddess by potters, and ends with Bisarjan (immersion of the murti in water bodies). Kumartuli in Kolkata is an old potters’ colony, famous for creating beautiful murtis of the devi. In 2013 I was in Kolkata during the months of July-August, when the process of creating the murtis generally start, and I was lucky enough to see how the artists’ work and the amount of labour and dedication that go into the entire process. First, a wooden frame is created by hand, which acts as a support for the entire structure. Then straw is used for making the basic body, where each body part is made separately and tied together, which is then fixed to the wooden frame. Next, clay (rich silt from the river Ganges) is lathered on the straw structure, out of which life-like bodies are moulded, and this is then left to dry. The clay has to be a mixture of four ingredients that contain ganga mati, go-mutra, gobar, and soil from the prostitute’s doorstep brought in by a priest. The Ganga mati which forms the main ingredient in this mixture is often mixed with other forms of mitti or mati, such as balu mati and thikana mati (two different types of clay found in Bengal).  The devi’s face is made with a POP mould using Ganga clay, as its fine texture makes it easy for the artist to do the outline and detailing on faces. Water is applied to the clay structure throughout the process generally with a brush, and  finer detailing made as required during this time when the water makes the clay soft. The first layer of clay takes more than two weeks  to be completely dry. Once it dries, another layer of fine liquid clay is applied to make the surfaces smooth. Once the second layer dries out, the murtis are painted by hand and also by spray painting technique.

My stay in Kolkata in 2013 was during the monsoons, and I was met with torrential rains, a common phenomena during the rainy seasons there. My school memories of the Kolkata monsoons largely consist of happily wading through swirling knee deep water covered roads during the rains, while coming back from school. It was undoubtedly fun as a school kid and I always looked forward to those torrential rains; but perspectives have considerably changed as an adult. Therefore, when I visited the potters’ colony in Kolkata and saw lines of  wet straw bodies and clay plastered murtis waiting for the sun to appear, and a group of visibly worried potters fretting about the incessant rains, I certainly didn’t feel happy. The puja was early that year (starting from 10th of October, 2013), and it was definitely worrisome to think that the potters might fail to finish before the puja started from Sashthi. 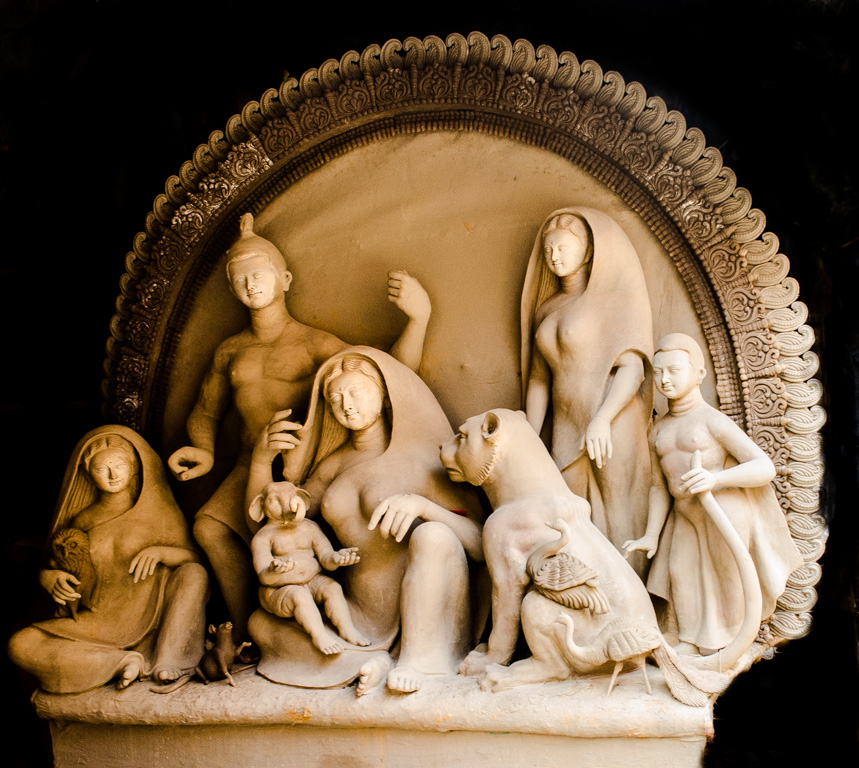 An incomplete and partly dried murti of the devi

Next year in 2014, I ventured into the potter’s colony once again in September. This time I went to the potters’ colony in Delhi (C.R. Park), and found the murtis were near completion and painting had commenced. In some instances, chokkhudaan or painting the eyes, which is considered as the most difficult task, were already over, and the potters were busy trying to meet their deadlines. 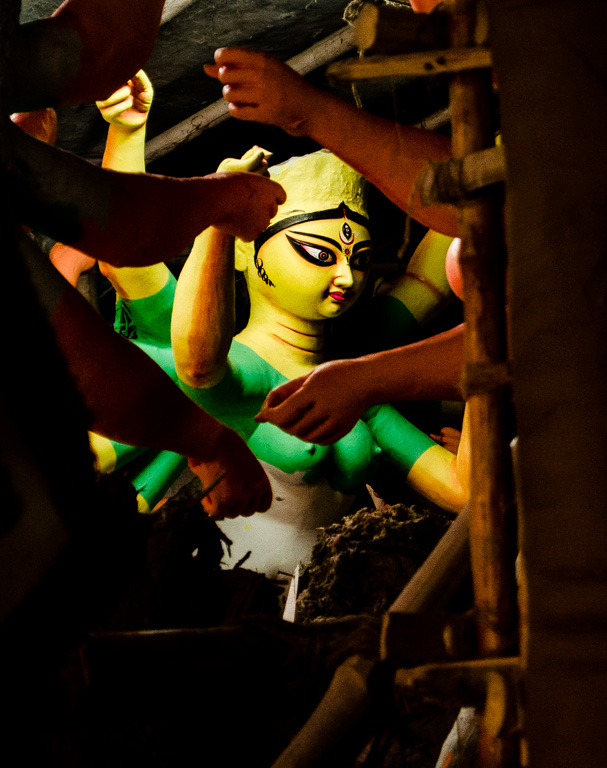 Painting the goddess, with chokkhudaan already over- in C.R.Park, Delhi

The Bengalis start their Durga puja celebrations on the sixth day, which is known as Sashthi. On this day, there are three main pujas: Kalparambha, Bodhan, and Adhivas +Amantran. Kalparamba, which takes place as dawn, means Sankalpa, or it is a promise made to perform the puja correctly, following all true rituals. At this time the ‘ghatastaphana’ takes place, and a copper pot filled with water is placed at a corner. The next puja is Bodhon, which takes place in the evening, and the devi is invoked at this time. The third puja is Adhivas +Amantran, where adhivas involves invoking the devi in a Bael tree (Aegle marmelos) . Lastly, the devi is sent an amantran or invitation, to accept pujas from next day. Here the Sashti puja ends, and daily puja rituals commence the next day, on MahaSaptami, and continue until the last day.

The daily puja rituals comprise of pushpaanjali, hom (yagna), cooking and distribution of bhog (prasad), playing of dhaak, dunchi naach, sandhya aarti, and boli (sacrifices, which are made on ashtami and nabami). 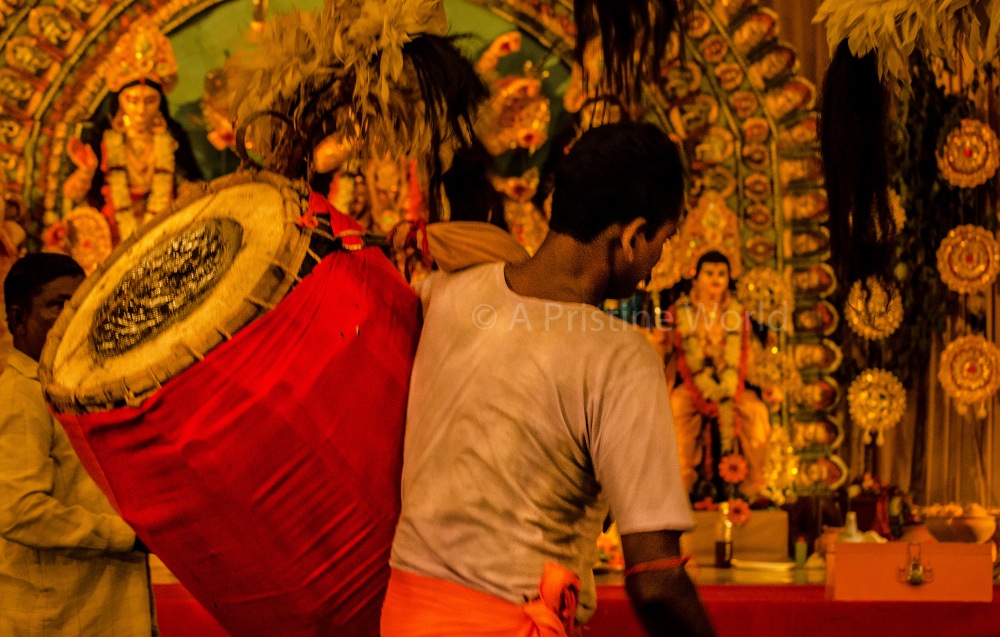 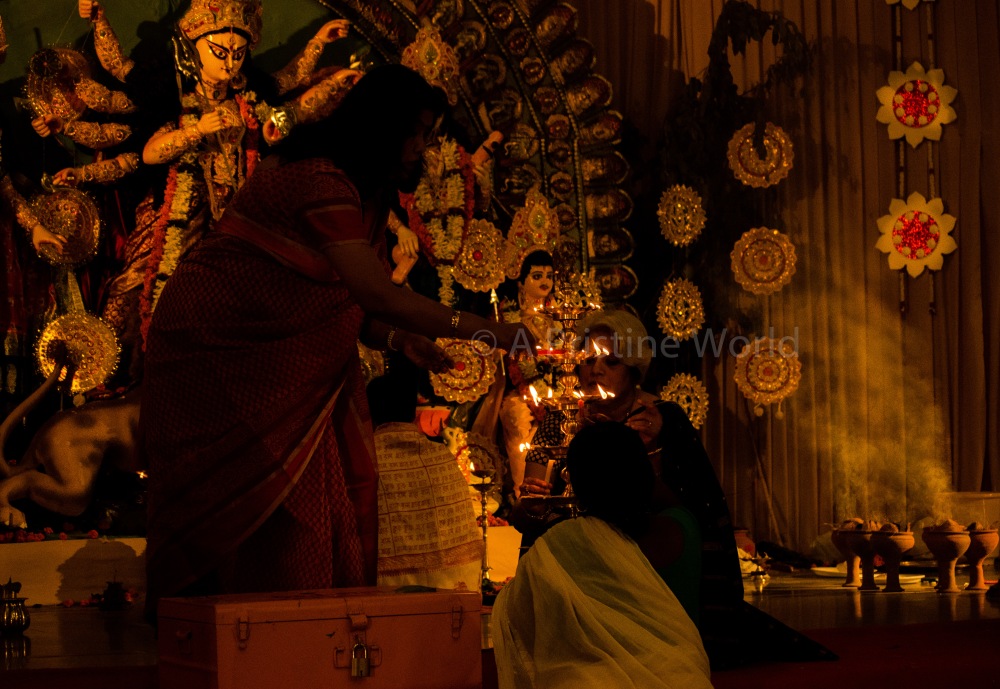 Sandhipuja  which takes place at the juncture of Ashtami and Navami

Another important part of the puja is the ‘Sandhipuja’ that takes place at the crossover time between Ashtami and Navami. According to our epics, at the time of sandhi pujo (24 minutes of ashtami and 24 minutes of navami), the demons Chando and Mundo attacked the devi from behind, which triggered the emergence of Chamunda (the violent form of devi), who killed the two demons. This is why traditionally animal bali took place (now replaced with vegetable bali) at this time to symbolise the two demons being killed. Hence, Ashtami and Navami are two days that call for special celebrations, ending with Dashami where the goddess is given a farewell. During Saptami, Ashtami and Navami, an integral part of celebrations involve ‘pandal hopping,’ where families and friends get together to visit various puja pandals. Pandal hopping is done not only to pay obeisance to the goddess, but also to compare pandal décor, the Devi’s face, lighting decorations, amongst various other things. This is best seen in Kolkata, and while the city is at its humid best at this time of the year, one can visit at least once, simply to understand the enormity and beauty of Durga Puja celebrations.

The Dashami puja involves bidding the devi goodbye, where married women place sweets in her mouth and put sindoor in her hair, while performing various other farewell rituals, asking her to come back again next year. It ends with ‘sindoor khela,’ where married women put sindoor on each other’s forehead and face. After Dashami puja, darpan bisarjan takes place, a symbolic bisarjan that declares end of all festivities, and later the devi is taken for immersion in rivers or other allocated water bodies.

Offering sweets to the devi before she leaves 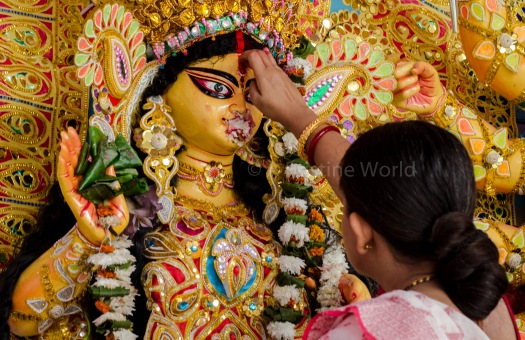 The ritual of sindoor khela

Thus, the Dashami farewell rituals and subsequent immersion bring to an end almost six months of backbreaking labour that goes into preparing for the six days of festivities. Subsequently, the end also marks the start of waiting, for the devi to visit her earthly home again next year.

(This was published on PhotoJourney )