In the northernmost part of Madhya Pradesh with its many hills, muddy cliffs and ravines, rivers, and lakes, lies the picturesque district of Morena. Once infamous for the Chambal dacoits, this place has undergone many changes and is now an industrial area. Historically, the region goes back to the pre-historical era in the form of rock paintings found in the Pahargarh caves in Morena (there are no fixed dates for these cave shelters). The dynasties that have ruled this area include the Mauryas, the Nagas, the Kushanas, and the Guptas. During the Gupta period, the region saw some temple building activities in the area now known as Paroli. After the Guptas, Morena came under the Gurjara-Pratiharas, and from 7th to 12th century CE the region saw some beautiful temples being built. Besides the Bateswara group of temples, there are the Naresar group of temples which were built by raja Yashovarman of Kannauj, while the Kakanmath temple at Sihoniya, the Chausath Yogini temple at Mitaoli, and the Padavli gadi Shiva temple were built by the Kacchapaghatas of Gwalior. 35 km north of the Gwalior fort, in a remote valley variously mentioned in literature as Dharon or Paravali or Padavali, lie the ruins of some 200 odd temples, known as the Bateshwar (Batesara) group of temples. A closer look at the ruins shows that the vandalism were the handiwork of the marauding armies of the Islamic invaders-rulers who did not stay too long in one place, and were just passing by entourage to the power centres like Gwalior. These structures happened to fall on their pathway as they moved on the once important trade and travel route connecting north and central India ( this massive work of destruction has been discussed in details by RC Mazumdar in his book “History and culture of the Indian people,” Vol 6). Built by the Gurjara-Pratiharas, starting from 7th/8th century CE, the frenzied temple building activity on this site continued well into the 12th century, thus showing various styles and art forms, while predominantly maintaining the ‘mandapika’ form. The mandapika shrines are among the earliest Hindu temple architecture seen in India, and is best defined in the words of Michael Meister (1976, 409) as “a pillared pavilion, the space between pillars filled by decorated slabs of stone.” Being the most basic or rudimentary form of Hindu temples, mandapikas initially were simple square pillared porches made of stone slabs, and lacked shikharas. However, as the style persisted well into the 10th century, the later period mandapikas are often seen with a nagara shikhara placed on them.

The Bateswara temples are mostly small and spread across almost 25 acres. The basic

temples show a square sanctum on a rectangular jagati (platform), which includes tiny pillared porches (praggriva) with extended awnings on top, providing shade to the entryway. The pillars show ghata-pallava on capitals, with decorative foliage or medallions on their bodies, and bases planted directly on the vedibandha. Most of the temples show Ganga Yamuna on the door jambs, while the lintels variously depict navagrahas, dashavataras, saptamatrikas, and various other deities. The other reliefs

and sculptures that are noticeable here are the Lakulisa, Shiva and Parvati, mithuna couples, kirtimukhas, nandis, the story of kalyana-sundaram, women musicians, men riding elephants or wrestling with lions, and narratives on friezes depicting stories from the Bhagavata Purana. There are also some scattered hero-stones and sati pillars of likely 9th century CE. The site reconstruction, which started in 2005 by the then ASI Bhopal region’s Superintending Archaeologist K.K. Muhammed, has painstakingly managed to bring back to life some of the temples that still retain the sculptures and structures described by Cunningham in his 1882-83 survey report.

Three illustrative floor plans (A, B, and C) found at the Batesvar site in Madhya Pradesh as prepared by Cunningham for his 1882-83 reports (p. 237). The top plan is of a nearby Gupta period temple and a covered tank known as Chaua kua that he had noticed during his exploration. 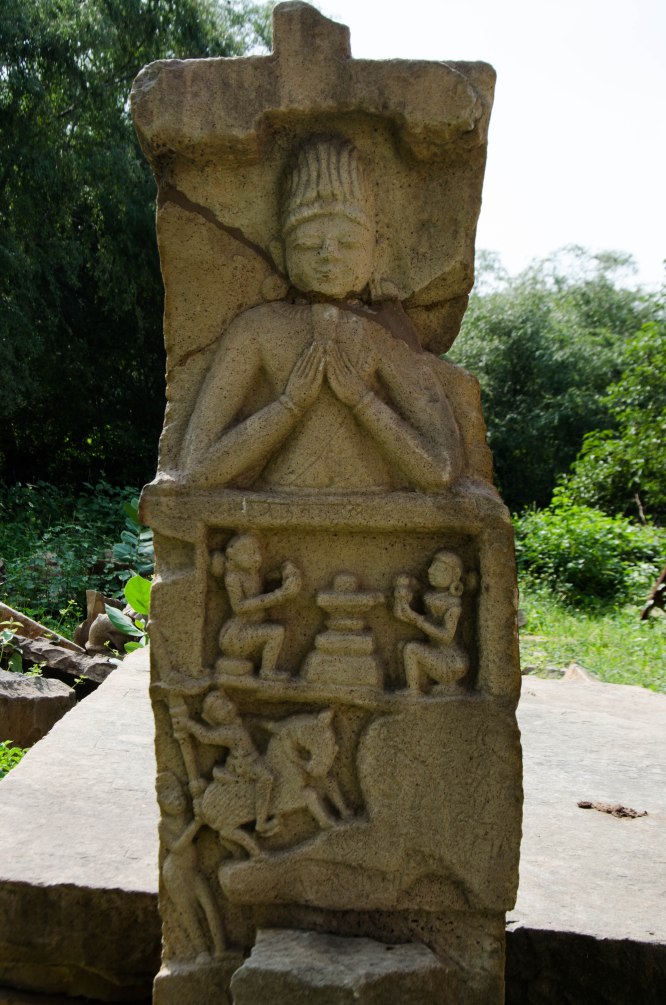 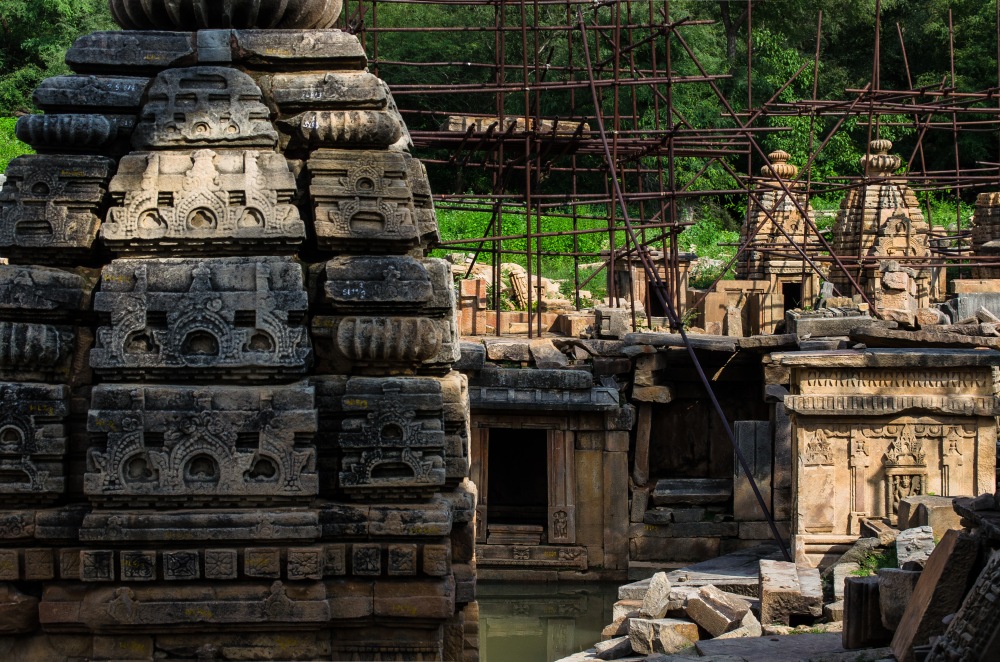 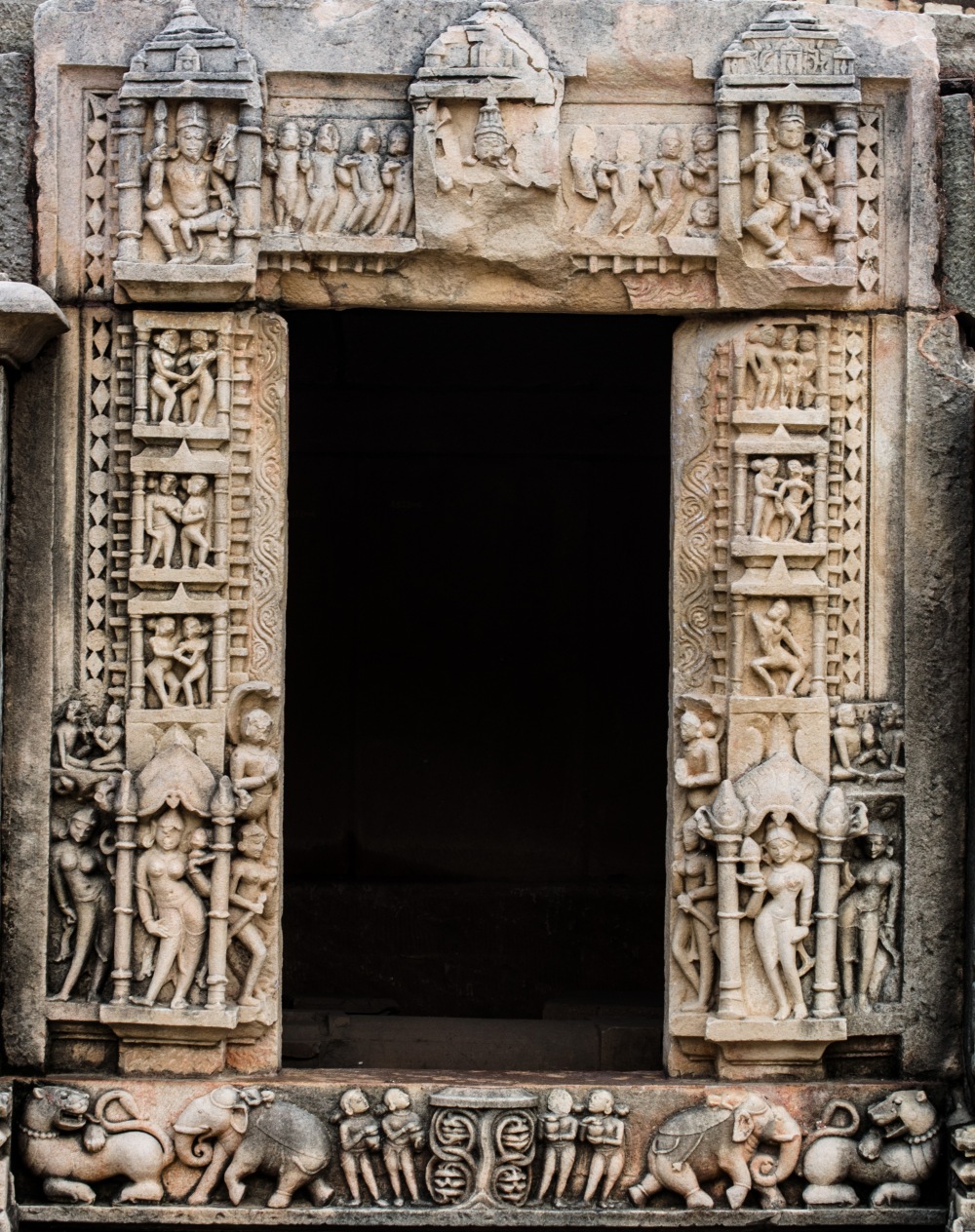 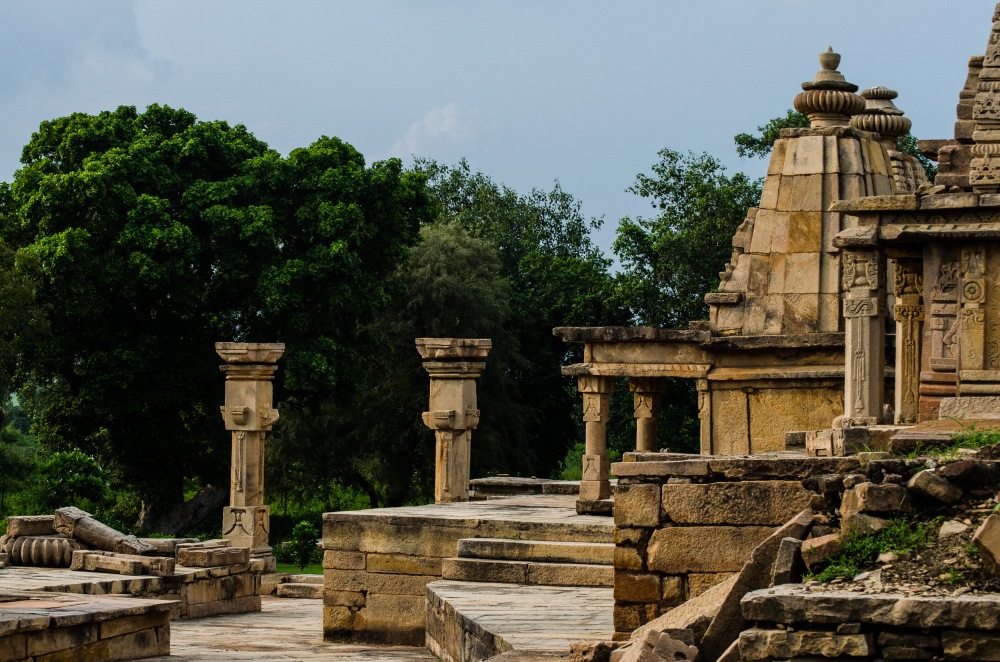 Located very close to the Bateswara group of temples lies an old eleventh century temple on a mound. The site is now known as the Padavali garhi, because of the bastions which were added to the temple enclosure in order to turn into a small fort or garhi, by the Jat king of Dholpur in the early 19th century. This oblong garhi, situated on 25-30 ft high mound, has a temple dedicated to Shiva, built likely by the Kacchapaghatas, which originally consisted of two parts: the upper part that held the old platform walls of the temples, and the lower court which held the central tower and a wall (Cunningham, 1882-83).

What we now see after being greeted by two stone simhas and climbing the stairs in Padawali garhi, is an entrance porch or the ardhamandapa supported on two pillars, and an open mandapa supported on 16 pillars, while the sanctum is non-existent. The ceilings and architraves of the mandapas are exquisitely carved with figures of Hara-Gauri (on north side), Surya, Kalika, Shiva, Brahma, Vishnu, ganas, musicians, among many others. 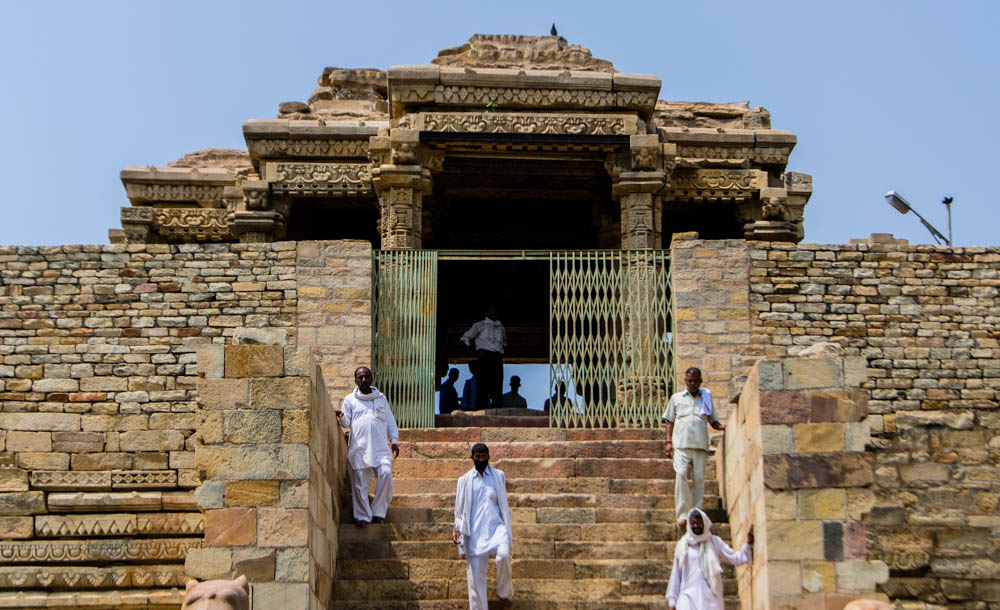 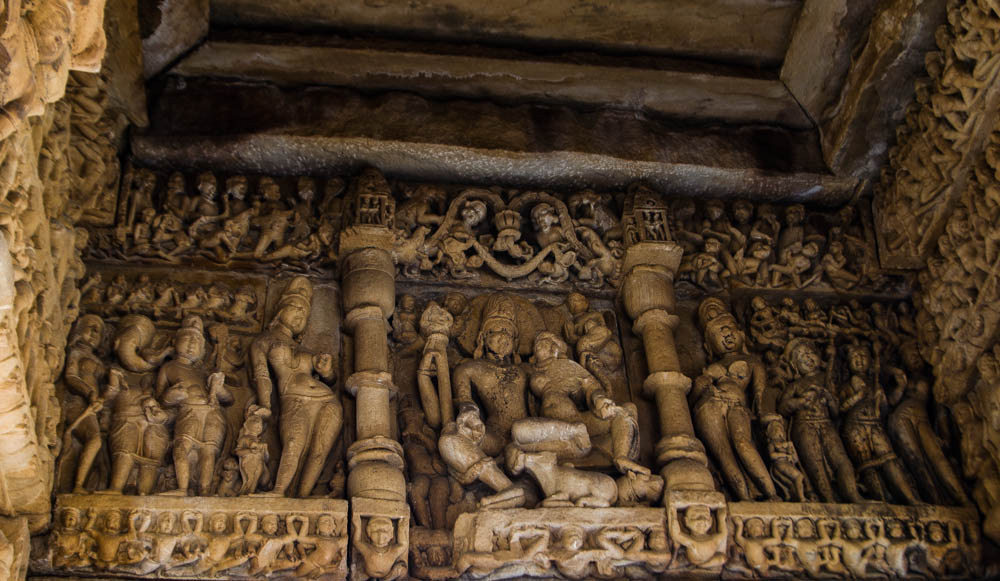 When to visit the Morena district: the only time to visit these places are the winter months (December to February) or during the brief monsoons.

How to go: the two sites are situated very close to each other and just around two hours drive from Gwalior. One will have to hire a car from Gwalior to visit these remote sites and it has to be a day visit, and one must return back before sundown as the entire area is pretty isolated.

4. For a complete story on how the Bateswara temples were restored, do check:

Story of Resurrection of ‘Bateshwar’ Group Of Temples : By KK Muhammed, on Youtube