Alwar (earlier known as Ulwar), a city in Rajasthan, is believed to have been a part of the ancient Matsya mahajanapada that had its capital at Viratnagar (now Bairat). It is said that the Meenas were the first to settle in Alwar and build a mud fort and town, remnants of which are still seen scattered in the surrounding hills and below the present Alwar fort. In the 14th century, Alwar was won over by Raja Nahar Khan of the Khanzada Rajput dynasty from Mewat State, after defeating the Nikumba Rajputs. The last king of the Mewatis, Khanzada Hasan Khan Mewati, lost his state to Babar in the Battle of Khanwa. Later, Alwar was taken over by the Bharatpur Jats, and in 1770 Alwar came under the rule of the Kachwaha Rajputs.

A major attraction in Alwar city is the City Palace (also known as the Vinay Vilas), built by Raja Bakhtawar Singh in 1793. The Palace now houses a district administrative office and out of bounds to tourists; however one can admire the splendid architecture of this building from outside. Also, on the topmost floor of the palace is a museum that one can visit, and which holds three sections: the first section displays toys and royal dresses, while the most interesting display is a bicycle with three hub gears and brakes built into its pedals, which once belonged to Maharaja Jai Singh. The second section holds the paintings, while the third one showcases weapons that include swords of Jahangir and Akbar.

Adjacent to the City Palace is the Moosi Rani ki Chhatri and Sagar kund. Built in 1815 by Raja Vinay Singh in the memory of Maharaja Bakhtawar Singh (a king of Alwar) and his queen Rani Moosi who committed sati, the double-storeyed monument with the Aravalli hills hemming it on three sides, is a beautiful structure. The ground floor with its innumerable petalled arches and pillars is made of red sandstone, while the top pavilion is entirely in white marble. There are some beautiful frescoes and paintings from our epics on the ceiling of the chattri. Next to it, with steps on all its sides, is a kund or water tank. Such tanks and baolis are seen commonly scattered all across Rajasthan, which once served as water reservoirs, and more importantly, as community centres. While the place still enchants, the monuments and the museum perhaps could do better with a little more conservation and maintenance.

Bala qila or Alwar fort is perched on a steep 1000 ft high Aravalli hill, and stands just above the Alwar city. The fort structure originally built in the 10th century was a mud one, which was entirely rebuilt by Hasan Khan Mewati in 1550 CE. Various additions were made to the fort as it passed into the hands of the Mughals, Marathas, Jats, and finally the Kachhwaha Rajputs who took over in 1775, when Maharaja Pratap Singh captured it. The 5 km long fort is among the most scenic spots of Alwar, and one can get a bird’s eye view of the entire city from its widespread ramparts. There are six entrances to the fort, which are Jai Pol, Suraj Pol, Laxman Pol, Chand Pol, Kishan Pol and Andheri Pol. The drive to the fort is through beautiful fields and forested roads, and if one is lucky enough there might be wildlife walking along the way. There are some canons kept just outside the fort gateway, and one can get to see pretty but fading frescoes on walls and ceilings inside the fort. The fort architecture is marvelous and one can spend few hours just admiring its beauty.

Around 25-30 km away from the Sariska National Park is a Shiva temple complex, which dates back to the 7th- 10th century CE, and was built by Maharajadhiraja Mathanadeva, a Pratihara feudatory ruler. Known as the Neelkanth Mahadev Temple, the complex sits on a small isolated plateau top surrounded by ruinous walls of the Rajorgarh Fort. A steep rough track with some dramatic views on the way, takes one to this temple complex.

The complex comprises of one surviving temple (partly reconstructed by the ASI), and an extensive area covered with ruins of some 200-300 odd temples. The single standing temple is said to be the only one that survived the onslaught of Aurangzeb and his marauding army, who were forced to flee the spot after being attacked by hoards of angry bees.

The main deity here is that of Neelkanth or Shiva, with a lingam adorning the garbhagriha. The scattered ruined parts and the standing temple are a shining testimony of the high standards seen in ancient/early medieval Indian temple art and architecture. The pillars, walls, and ceilings of this temple show intricate carvings of kirtimukhas, dancers, musicians, mythical animals, mithuna couples, saptmatrikas, and various other deities. The temple shikhara remains undamaged and is of the nagara style. A little distance away from the Neelkanth temple stands a tall statue of the Jain tirthankara Shantinatha, made of light orangish-red sandstone. An inscription now placed at the National Museum in Delhi says that a Jain temple was “dedicated to Shantinatha and built on the 13th day of the dark half of Baisakha in the year VS 979 (AD 922-23) during the reign of Gurjara-Pratihara ruler Mahipala I Deva of Kannauj, by the architect Sarvadeva of Simhapadra.“ 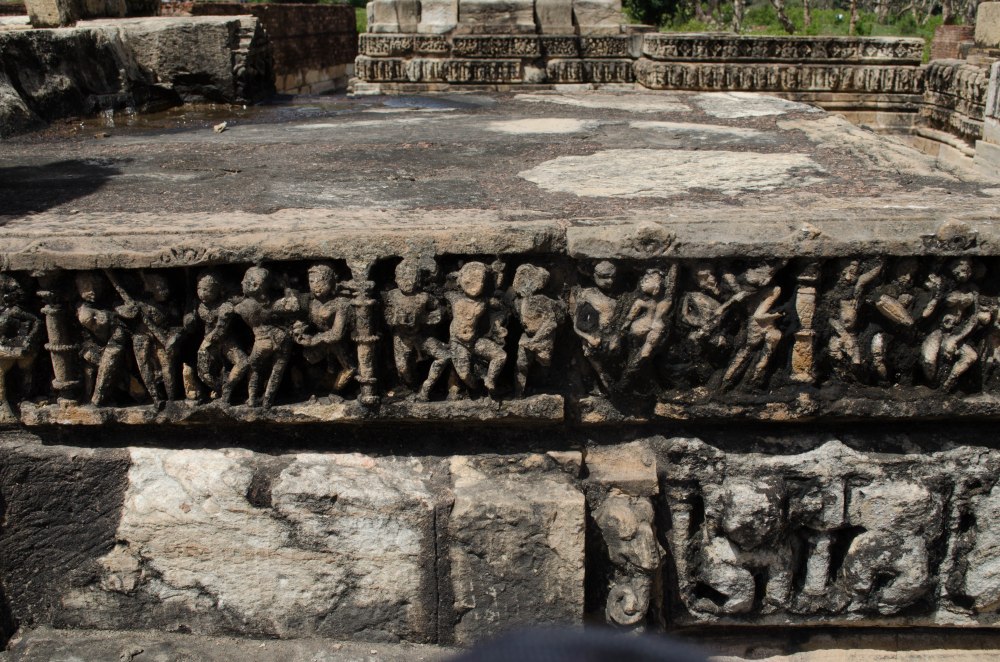 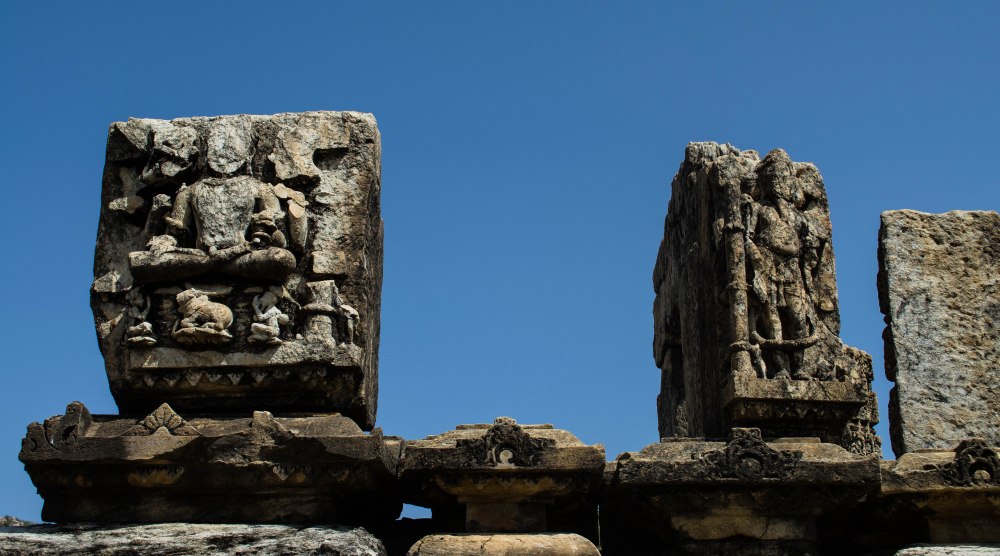 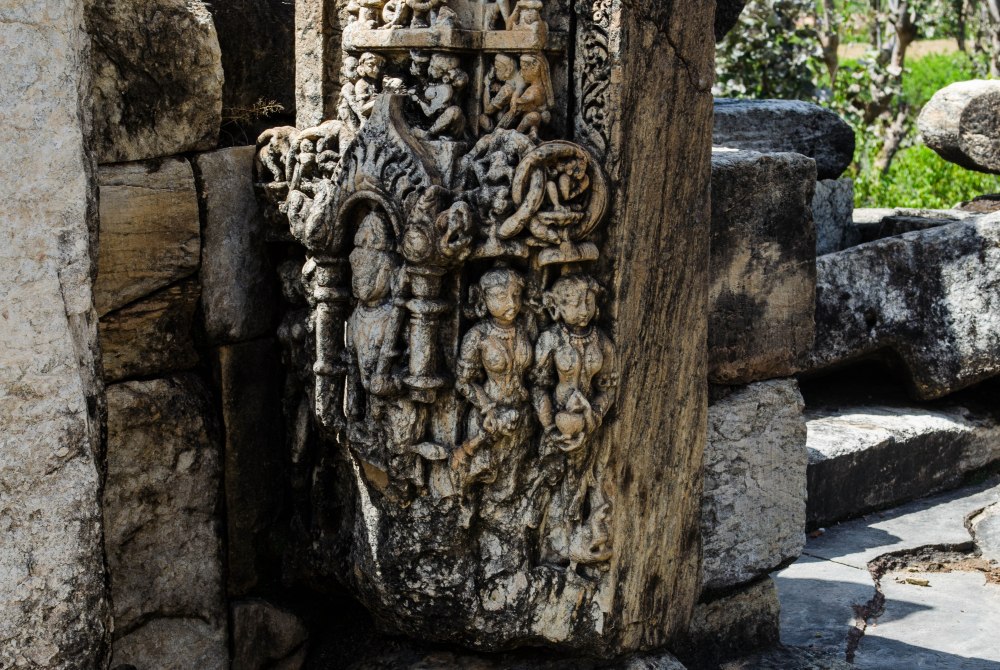 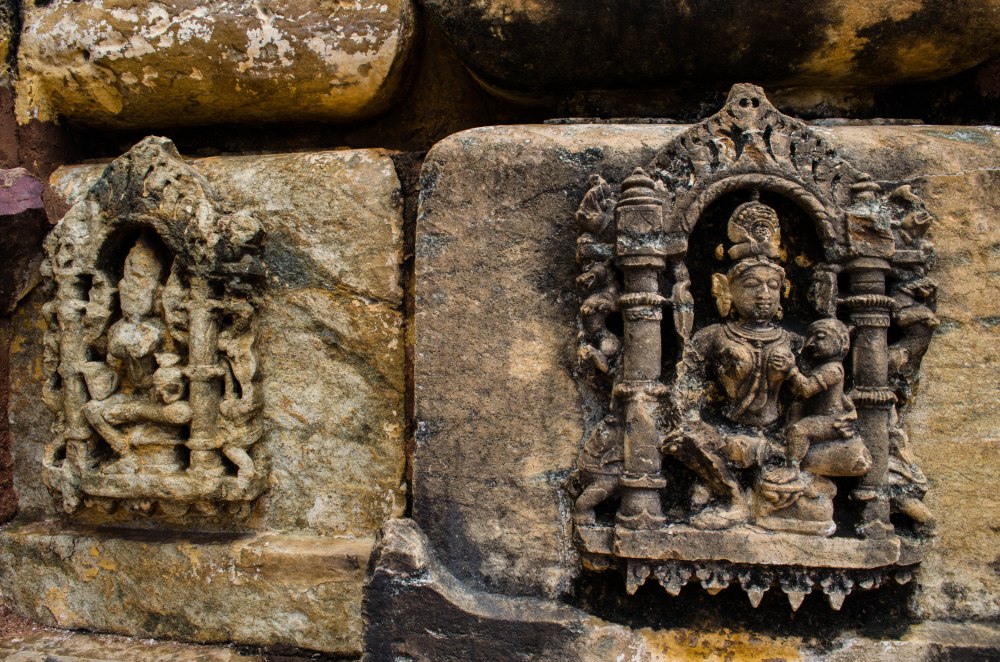 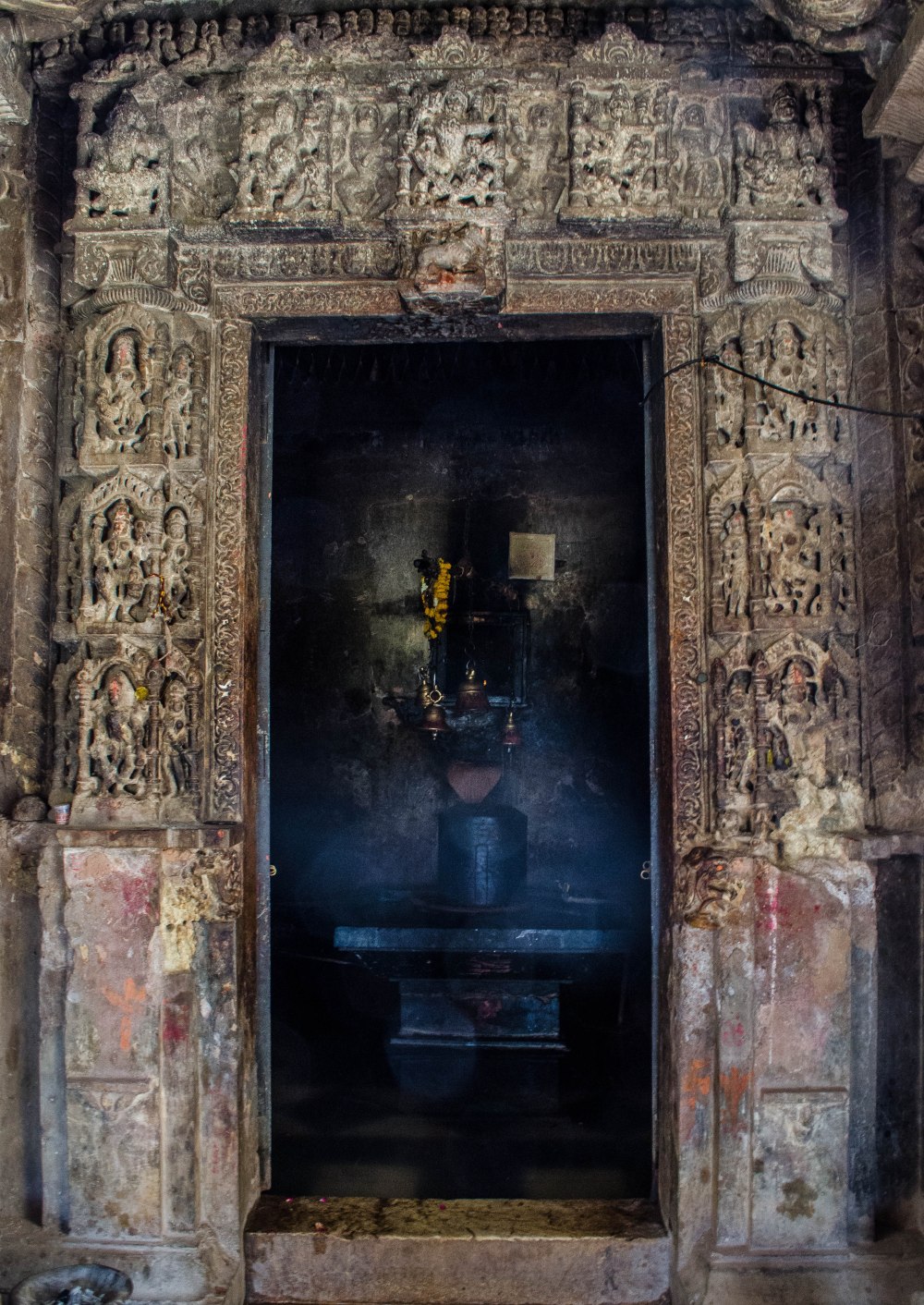 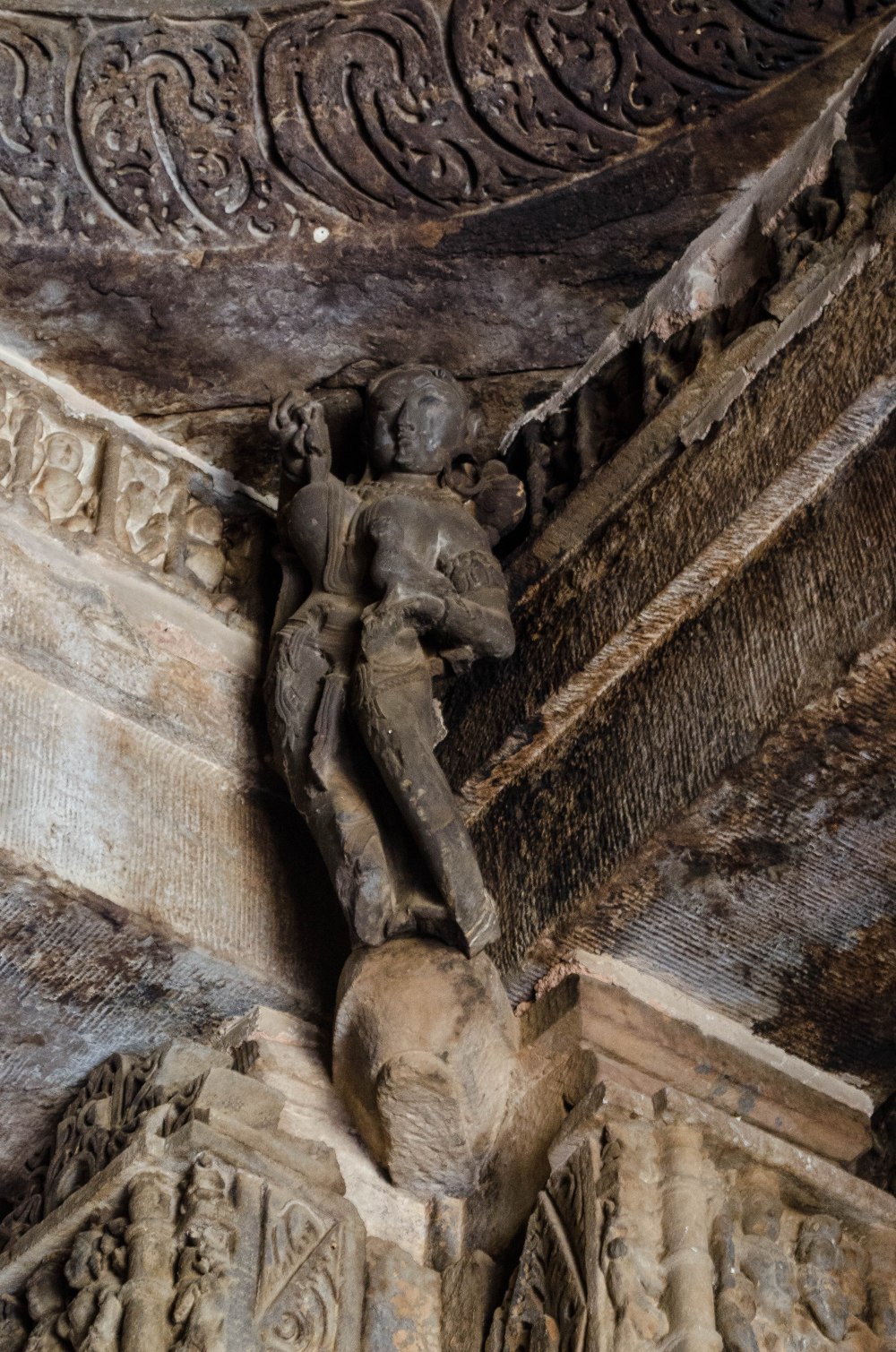 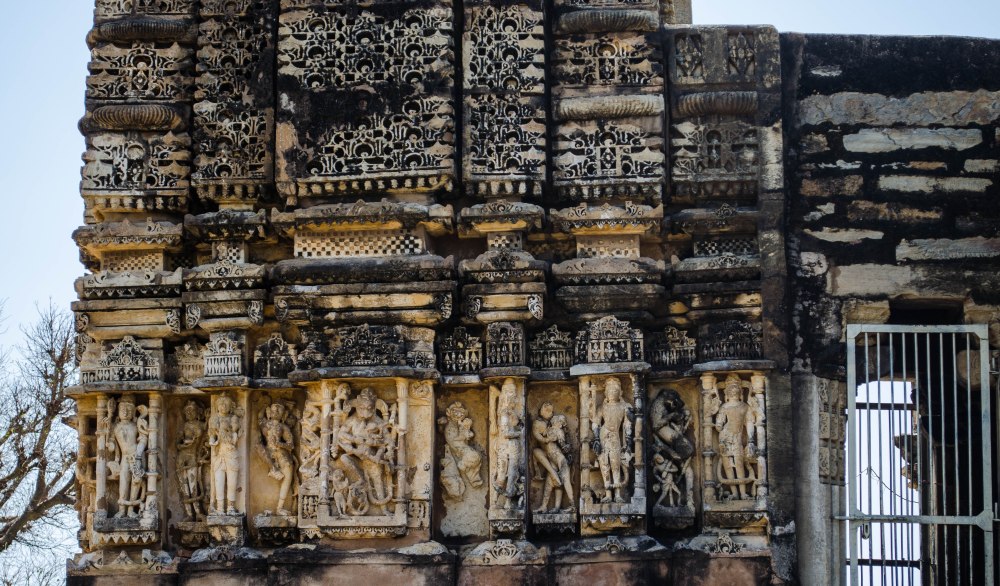 The Beautiful Landscape of Alwar

Post script: Another monument worth mentioning is the Fateh Jung ka gumbad in Alwar. Fateh Jang, a governor of Alwar died in 1547, and his tomb must have been built shortly afterwards. Cunningham described the building (1880) as, “the tomb is 60 feet square, and consists of three storeys of the same breadth, with seven openings on each face of each storey, and fluted octagonal minars at the four angles. The dome springs from an octagonal neck standing on a fourth square storey, of smaller size, or about 40 feet each side.” Internally it boasts of plaster-work ornament in low relief. However, when we had gone (2015), we found that the monument was completely surrounded by slums, and we had to ask the slum dwellers to remove their charpoys and other daily household items to navigate our car. So a visit to this place is advisable only for those who are especially keen on heritage and architecture. 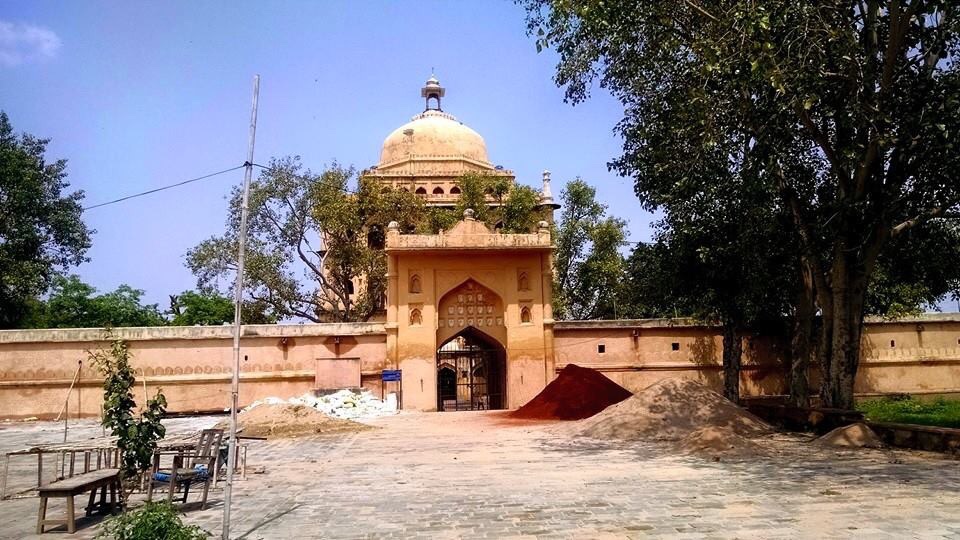 How to go: Alwar is well connected with Delhi and Gurgaon via road and is just around 4-5 hours by car. Train Passengers can easily reach Alwar by rail from Jaipur or Delhi. If looking to reach by air, the closest airport is Sanganer airport in Jaipur, which is 150 km from Alwar.