The history of Bengal goes long back archaeologically, wherein tools from the Stone Age era dating back to almost 20,000 years have been found from various excavated sites. In historical texts, we find that the epic Mahabharata talks of this area as divided into different kingdoms: Magadha, Banga, Pundra, Anga, and Suhma. Each part was ruled by different tribes, and the languages they spoke belonged to the non-Aryan group of languages, still extant among some of the tribal communities, such as Santhal, Bhil, and Shabara. The neighbouring janapadas at that time were the Kalinga (Odisha), Videha (Nepal), and Assam which the Mahabharata mentions as Pragyajyotisha (prior to the Ahoms coming from China/Myanmar and settling there in the 13th c. CE). Later, people speaking the Tibeto-Burman and Dravidian languages settled in this area, adding to the cultural and linguistic diversities. Bengal also finds mention in the book Indica, written by Megasthenes, who referred to it as Gangaridai.

Bengal art and craft still maintains its tribal roots, which is evident in some of the toys, dolls, and masks that we see in this state.

The Dolls of Bengal:

The Bengal dolls go long back into history, a journey that started almost with the start of human settlements in the Bengal area. Various baked clay dolls of feminine figures found during archaeological excavations from different parts of Bengal stand as evidences to this ancient craft of making dolls. Made by the potter communities, these dolls have been used for centuries in different religious practices, and sometimes played with as toys; while in the modern context often used as objects for home decor. Besides baked clay, Bengal artisans also use jute, metal, shola (sponge wood), wood, palm leaves, shellac, etc., for making dolls. Interestingly, cow dung is used for making an ugly doll like figure of the Alakshmi, which is used for ‘Alakshmi vidai’ during the worship of Lakshmi (the Lakshmi puja that takes place in Diwali/Kali puja). Given here are some of the traditional dolls and toys of West Bengal that still survive, despite the various hurdles and hardships faced by the artisans, which speak volumes of their love and devotion for their work.

Historical origin of the Bengal masks is rather vague, but the general belief is that it has its origins in the pre-historic times, when the masks were worn by the tribal priests or  shamans, to ward off evil spirits. It is for this reason masks have been incorporated in various ritualistic dances and used for appeasing evil spirits while praying for the overall well-being of all. Various folk dances and plays are enacted, where the actors wear colourful masks, like what we see in the famous Chau dance of Bengal Palamau. To make masks, the artisans use a variety of items that range from clay, wood, bamboo, shola, and paper, and paint on them to create beautiful works of art.  Each mask shows distinctively the characteristics of the region from which they originate, and each regional variety is unique in its exquisite craftsmanship.

The dolls, toys, and masks of Bengal speak strongly of their tribal roots, and show the

amalgamation of different cultures that have stayed in Bengal from the ancient times. Many of these crafts are now rarely seen, and some are already dying out. As for example, the villages of Pashchimsai, Panchrol, and Pratapdighi in district Midnapore were once famous for their shellac dolls. Now only one artisan in the Pashchimsai village makes them. As these traditional crafts die out one by one owing to a lack of patronage, at the same time, unknowingly perhaps, we also keep losing a part of our culture and heritage piece by piece. 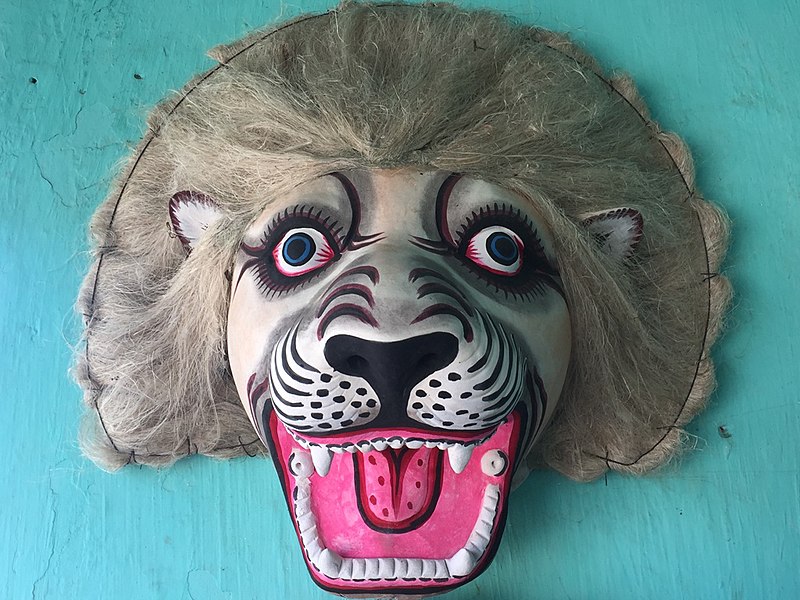 These dolls and masks and other Bengal handicraft products can be seen and ordered at the West Bengal government run Biswabangla shops. The link to their website is BiswaBangla

Owing to their unavailability and a general lack of information, some of the photos of the dolls and masks that I have used here are from Biswabangla:

The cover picture shows the Chau masks from Charida village in Bagmundi, Purulia district, and is by Kinjal Bose, taken from the Wikipedia.

(The photos used here are strictly for representational purposes only)