Few days back I came across a news link that spoke of the recent installation of paintings by Gaganendranath and Abanindranath Tagore in the Victoria Memorial museum gallery (Kolkata). The first feeling was of immense happiness seeing the two 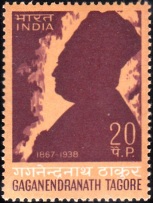 artists finally receiving their due places in the hall of fame. The second feeling was of contemplation, wondering how the two brothers despite their brilliance remained in the shadows, while their uncle Rabindranath Tagore shone like the sun. Was this the disadvantage of having a contemporary famous figure within the same family? Perhaps Yes; but then the two brothers, especially Gaganendranath, was of a shy disposition and an unassuming bhodrolok, who never really courted fame. In our country, the flighty goddess of fame is often kinder to those who can hard-sell themselves. Gaganendranath Tagore definitely wasn’t one among them.

Gaganendranath Tagore along with his brother Abanindranath are considered to be the pioneers of modern art in India in varying dimensions; while the former’s paintings reflect greater discernment and eloquence. Despite being the harbinger of modernism and helping many young artists to establish themselves, Gaganendranath did not work towards acquiring a faithful set of followers, nor did he establish any specific painting style for the next generation of painters to follow. It is also said that this great artist had lost both his powers to talk and paint in the last nine years of his life. His personal dreams that had once gained wings through some of his most beautiful paintings (Dreamland), remained imprisoned within his scintillating mind in the last few years of his life.

The Bengal School of Art

Among the influences that the British had cast on the cultural aspects of India, the one on Indian art was rather strong. Artists across the country abandoned traditional Indian forms, and moved towards creating art that was more suitable for the British sensibilities. This was the era of Company artists and picturesque paintings that produced some important artworks (of the documenting type) depicting Indian landscapes, flora and fauna, ancient monuments, festivals, and ‘exotic’ natives. However, with the beginning of the 20th century there was seen a significant shift away from the colonial influence towards a strong sense of nationalism, and with it started the Bengal School of Art.

Based on ideologies of nationalism and a stand against colonial rule, the ground

breaking movement of Bengal School changed the Indian art scenario with its ‘swadeshi’ touch. Started by E.B. Havell, the then Principal of the Government College of Art (Calcutta), and supported by Abanindranath and Gaganendranath Tagore, soon the Bengal School of Art revolutionised the art world. The artists trained under this school developed some distinct common characteristics, such as, producing solemn effect with limited colours, and frequent use of the tempera style. The Bengal school of art that produced many beautiful landscapes, monuments, portraits, and rural scenes, was highly influenced by the Ajanta style of painting, and mixed it with the Pahari, Rajasthan, and Mughal gharanas. To bring in more oriental influences Abanindranath and Gaganendranath Tagore also experimented with Chinese and Japanese art, and the Japanese wash technique soon became popular among the Bengal School painters. The Bengal School of Art movement was a short lived one, and it started declining from the 1920s, once the modernist form took a firm shape and hold. However, this movement is a significant one in the Indian art history as it gave back the Indian identity to Indian art; while introducing modern art in India.

Gaganendranath Tagore was born on 18th September 1867 at Jorasanko, Kolkata. A great-grandson of the famous entrepreneur Prince Dwarkanath Tagore, Gaganendranath lost his father when he was just fourteen, and was forced to give up formal education. While taking up the helms of the family’s zamindari, he self educated himself in literature and arts. Around 1906 he decided to learn Japanese brush techniques, and influenced by the paintings of Tykan Taikowan and Yokohama Okakuru, he started using it in his paintings. The Japanese influence was prominent in his paintings for Rabindranath’s Jeevansmriti that was published in 1912.

Later, Gaganendranath showed an interest in satirical caricature and created some brilliant illustrations that were published in some books and in the Modern Review.

In the 1920s, Gaganendranath experimented with Cubism using German and French styles, creating his own form of cubism.

Rabindranath Tagore (1938) wrote about his nephew’s art, “What profoundly attracted me was the uniqueness of his creation, a lively curiosity in his constant experiments, and some mysterious depth in their imaginative value. Closely surrounded by the atmosphere of a new art movement … he sought out his own untrodden path of adventure, attempted marvellous experiments in colouring and made fantastic trials in the magic of light and shade.” (Journal of the Indian Society of Oriental Art (Vol. 6))

Gaganendranath’s works were displayed in various exhibitions held in London, Paris, Berlin, and America, between 1914 and 1927. Inspired by the swadeshi movement, he redesigned his furniture and interiors of his Jorosanko home, replacing all European pieces with indigenous crafts from Bengal. Gagendranath also experimented with writing and authored a children’s book named Bhodor Bahadur. He took part in various plays (natyas) organised by Rabindranath, and was in charge of designing the costumes and sets.  He brought in many changes in theater costumes, and created the bakhu (a type of Tibetan dress) inspired overcoat that Rabindranath was always seen wearing in his later years (famously known as jobba).

Between 1910 and 1921 Gaganendranath sketched and painted the Himalaya, and scenarios from daily lives. These were published in the Abadhut Lok (1915), Birup Bastra (1917) and Naya Hullod (1921). Here it is interesting to note that Gaganendranath rarely left his city home, and had never travelled to the Himalaya. All his illustrations of landscapes and the mountains were made after hearing stories from those that travelled, and the rest were from his imagination 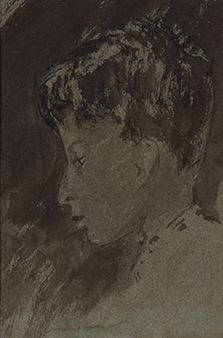 “He painted several series of pictures on the events in the life of Chaitanya and on some legendary tales. Unlike Abanindranath and some of his pupils whose works show their indebtedness to such art traditions as Ajanta and Mughal paintings…[he] was not much influenced by any particular school of painting. He saw the world introspectively and with his own eyes, and make pictures on original lines. Bengal in its different moods has been revealed in his work.”(Dineshchandra Sen, “As I Knew Him”, Gaganendranath Tagore, Calcutta: The Indian Society of Oriental Art, 1972, p10).

Gaganendranath’s interest in the Chaitanya story is believed to have started while listening to kirtans being sung in the house to divert the family from the shock of his son’s death. 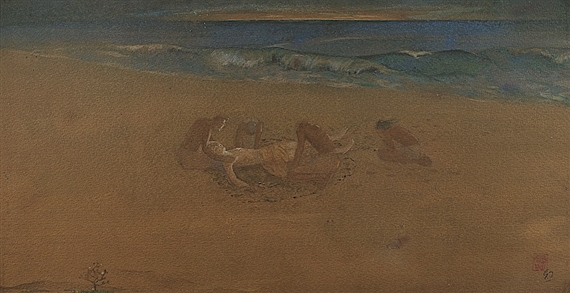 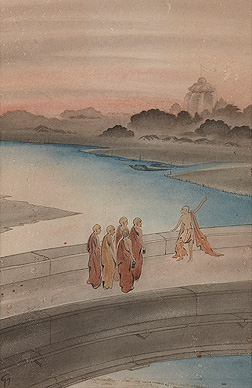 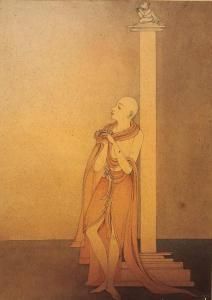 Gaganendranath Tagore was deeply affected by the plight of the common people and the cultural, social, and political upheaval in British India in the early 20th century. While many Indians (mainly the elite segment ) were giving more precedence to the European academic style, thus making it a benchmark for artists to follow, Gaganendranath walked the opposite way, putting more emphasis on India’s unique identity and the concept of nationalism. The Bengal school of Art that he started with his brother Abanindranath was a revivalist one, deeply imbibed with the ideology of going back to roots, placing more importance on the indigenous painting styles. Gaganendranath was among the few artists who sincerely tried bridging the deep chasm between Indian indigenous art and Western academic art though his various experiments.

To know more on Gagandenranath Tagore’s works and his style of paintings the following books will help:

To see the the paintings of Gaganendranath Tagore in the virtual exhibition at Victoria memorial click on: