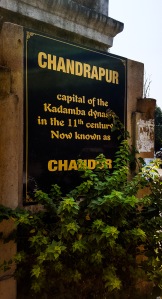 The very name of Konkan conjures up scenes of lush greenery during the monsoons, seasonal waterfalls, low hills with ancient Buddhist and Hindu caves, and various forts built by the Portuguese and the Marathas. Recent excavations and archaeological findings have added further layers to this area already rich in ancient and medieval heritage. For the last few decades archaeologists have been working on various sites near the Konkan coast. Various pottery fragments, sculptures, and remnants of ancient structures provide valuable insights into the life of a common man. The different archaeological excavations are discovering evidences of ordinary early medieval life in the Konkan, and of a “flourishing international trade and vibrant economy all along the coast” .

Location of Chandor in Goa (photo from frontline images)

Chandor, a sleepy village consisting of old rambling villas, is located in South Goa, on the banks of the river Kushavati, 13 km east of Margao and across the fertile rice fields  of Salcete. While walking down the shaded tree-lined lanes of this pretty hamlet, one gets a strange feeling that time is standing still and the Portuguese are very much around, still ruling the roost.

With facades of graceful Portuguese houses dotting the countryside, the historical timeline of Chandor, however, goes back much further, and this sleepy village played an important role in defining Goa’s ancient history, as evident from the various fragmented archaeological remains in the form of ancient inscriptions, sculptures, and other artefacts.

While Goa’s history goes long back to the 3rd BCE when Chandragupta Maurya reigned supreme, some excavated pottery found in Chandrapur belonging to the Satavahanas place the probable origin of this once important trade centre to 200 BCE.  After the Satavahanas, came the Bhojas who made Chandrapur or Chandor their capital, as evident from the various inscriptions found, dated between 3rd-4th CE. Next in the power race came the Chalukyas of Badami (580 CE to 750 CE), followed by the Shilaharas, and the Kadambas. The arrival of Kadambas saw the capital being shifted from Chandrapur to Goapuri or the modern Velha Goa around 1029. As maritime supremacy reached its zenith, the place known to the Arab cartographers as Zindabar, thrived as a central hub for various commercial activities. Both Hinduism and Jainism flourished under the Kadambas. This calm and prosperity was shattered with the appearance of Malik Kafur and his army in the horizon like black locusts in 1312 CE. Soon the entire Konkan region along with Goa faced massive destruction at the hands of this general of the Delhi Sultanate. In order to escape the wrath of Malik Kafur, the Kadamba king fled to the erstwhile capital of Chandor, and built a fort there.

When Kafur came in 1312, the Kadambas were however already a spent force, and their kingdom was limited to just Goa. Additionally  the dynasty had started facing trouble with internal fights over the control of power. The thriving trade by this time had also dwindled considerably due to various factors, both external and internal. Whatever glory was left of the Kadambas, was completely destroyed by Muhammad bin Tughlaq’s army in 1327 CE. After this, Goa (and Chandrapur) briefly went under the Vijaynagara empire, followed by the Bahmani Sultans (1469 CE), and lastly the Adil Shahis of Bijapur (1488 CE). The power race of the Islamic invading armies finally ended here, and in came a new player from across the western seas, the Portuguese!

While visiting Chandor in 2016, I was lucky enough to see some artefacts from the excavated site of an ancient temple displayed inside a villa called the Fernandes Heritage House. Sculptures of Vishnu, Ganesha, Shiva lingam, a piece of stone bearing inscriptions written in early Kannada script, among others,  speak of a rich cultural past of this ancient town. The owner said these pieces were randomly lying around in Chandor, and they being mostly temple parts were taken in by his forefathers, who did not wish to let the temple sculptures waste away in open fields. 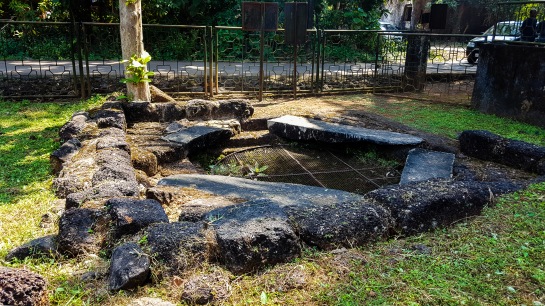 The temple site in Chandor Cotta was first discovered by Rev. Fr. Heras in 1929. The ASI has made two excavations at this site, one in 1974, and the other in 1999-2000. The site now has a lone Nandi and a step-well, which is now covered with a wire mesh grill to avoid accidents (picture credit: Zehra Chhapiwala) 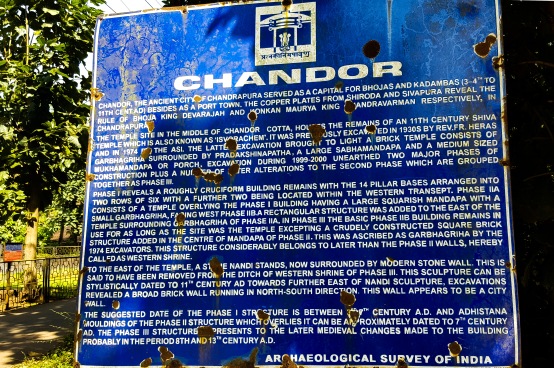 The history of the temple site by the ASI- Goa (picture credit: Zehra Chhapiwala) 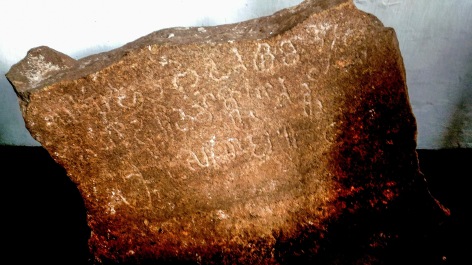 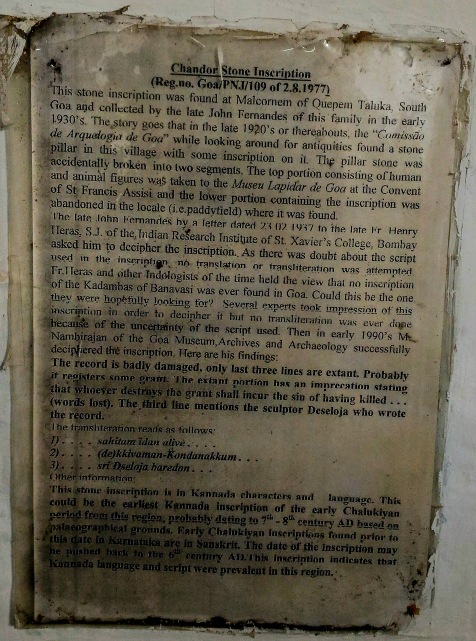 (b) History of the inscription

The Portuguese rule in Chandor

The Portuguese came to power in Goa in 1510, after defeating the then Bijapur Sultan, Yousuf Adil Shah. They set up their first capital in Velha Goa and thus began their four century long rule in the State. At this time they imposed their infamous ‘Inquisition’ on the people of Goa, with the objective of forcibly converting local Hindus to Roman Catholics. This Inquisition was primarily a method of social control against the Hindus and the converted Catholics, who they feared, practised their old faith behind closed doors.  Later, it was also imposed on the Jews from Portugal, along with some of the old Christians and new converts too.  Soon this turned into an easy way of taking away desirable properties by the Inquisitors (Benton, 2002, p. 122).

Chandor too faced the brunt of these Inquisitors and many families converted to Christianity to save their lives. Some of these early converts were richly rewarded. The first family in Chandor to embrace Christianity was the Braganza family. They were granted trade rights to various parts of the world, as a result of which the family became immensely wealthy within a short span and built a huge mansion that is one of the largest and the oldest surviving Portuguese villa in Goa. During my visit to Chandor, I visited two such palatial mansions owned by the converted Christian families. One of these mansions is more than 400 years old and owned by a branch of the Braganza family. The opulent interiors still reflect the long gone grandeur of these palatial homes, and while moving from one room to another one can only imagine the immense wealth and power that these families had once enjoyed. 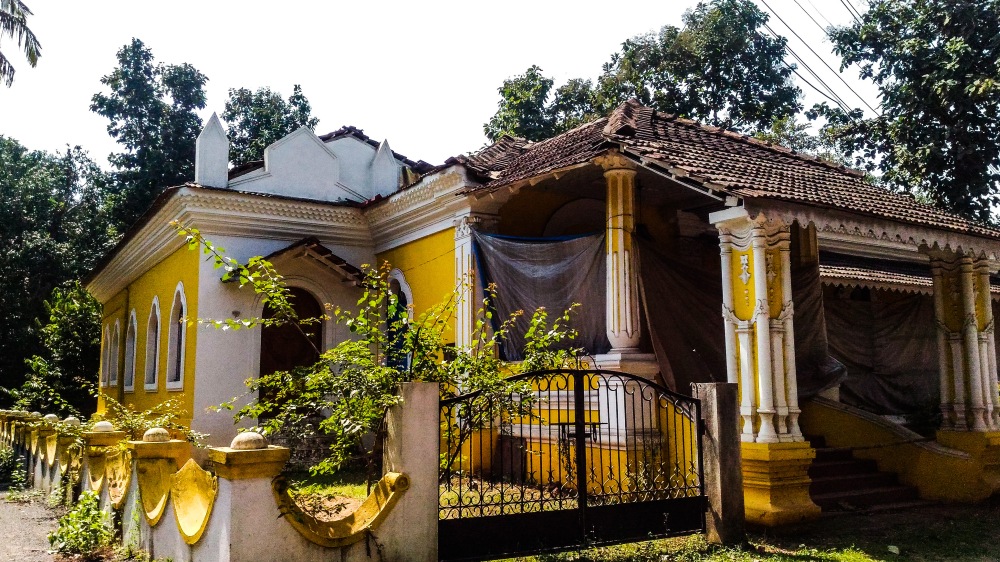 A palatial mansion/villa in Chandor 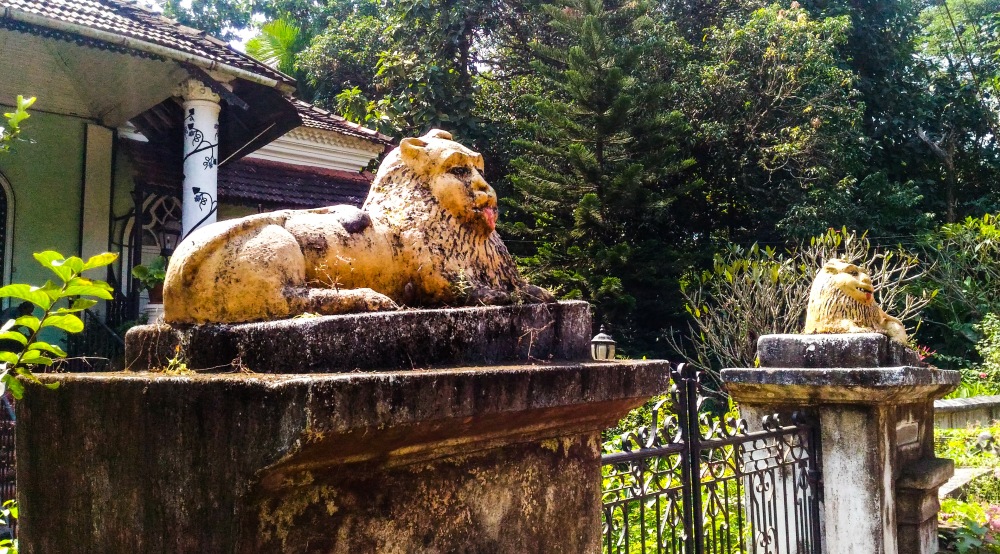 From roaring on the seal of the Kadambas to sitting and yawning outside a Portuguese Villa, the lions best represent Chandor of today; decaying grandeur 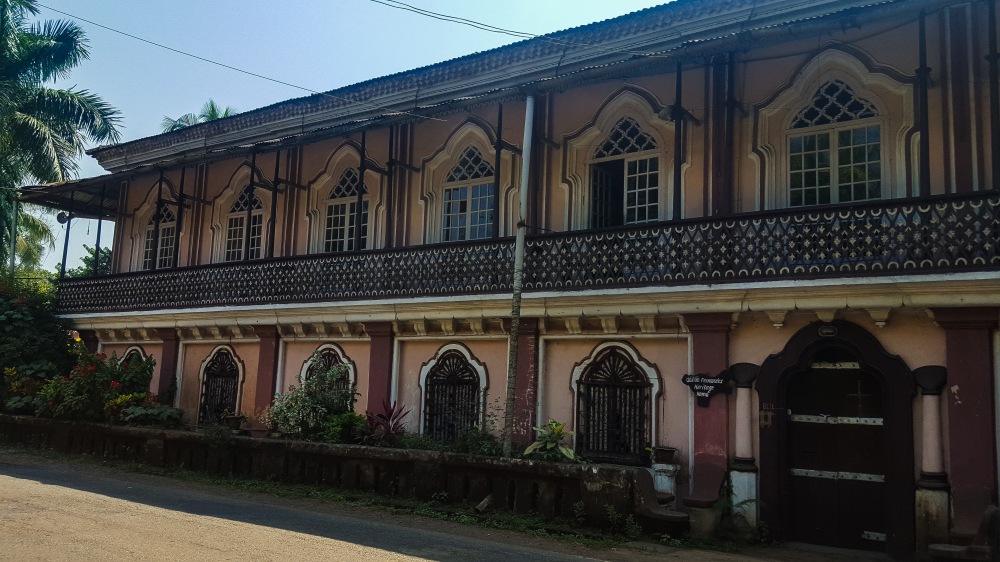 Casa De sobrado, or the double storied house. This architectural pattern for houses was first brought in by the Portuguese. Modelled on country homes in Portugal, the lower level was kept for servants, services, and animals, while the upper level was reserved for the owners. The intricate decorative work was seen only on the first level (picture credit: Zehra Chhapiwala) 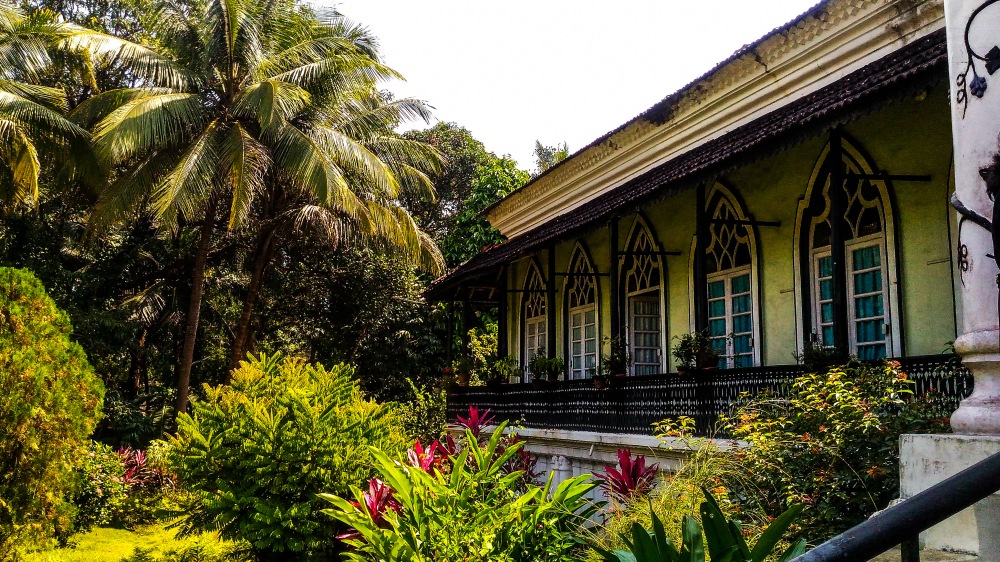 Another Portuguese style villa in Chandor 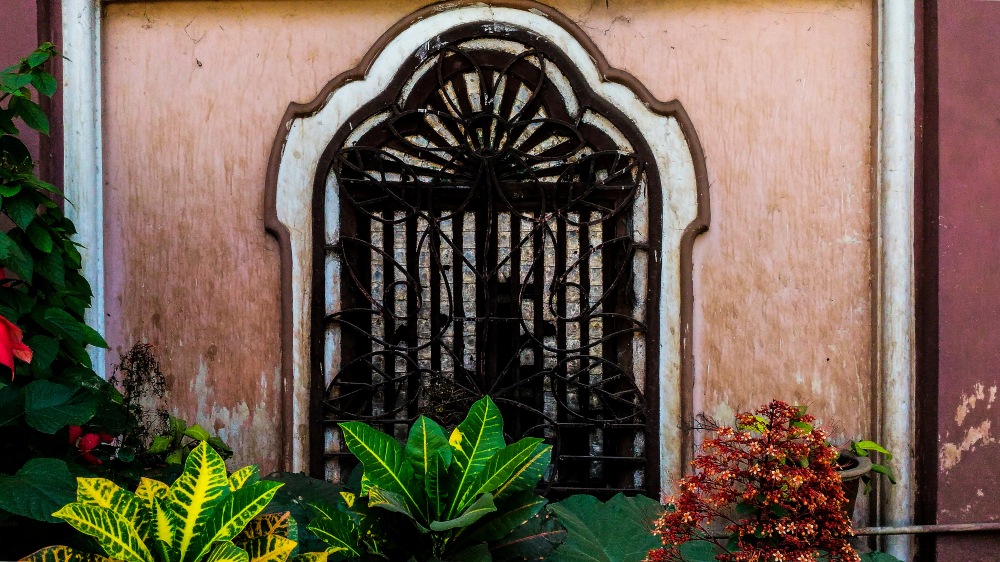 The most charming part of old Portuguese houses in Goa are their unique windows. Flattened and dressed conch shells of the oyster Placuna Placenta, locally known as Karepa, were fitted between grooved wooden battens carefully by local workers. These shells did not just mute the harsh sunlight filtering in but also bathed the interiors in a warm glow. Alternatively, nacre of the mother – of – pearl oyster was used by the well heeled for their stately villas 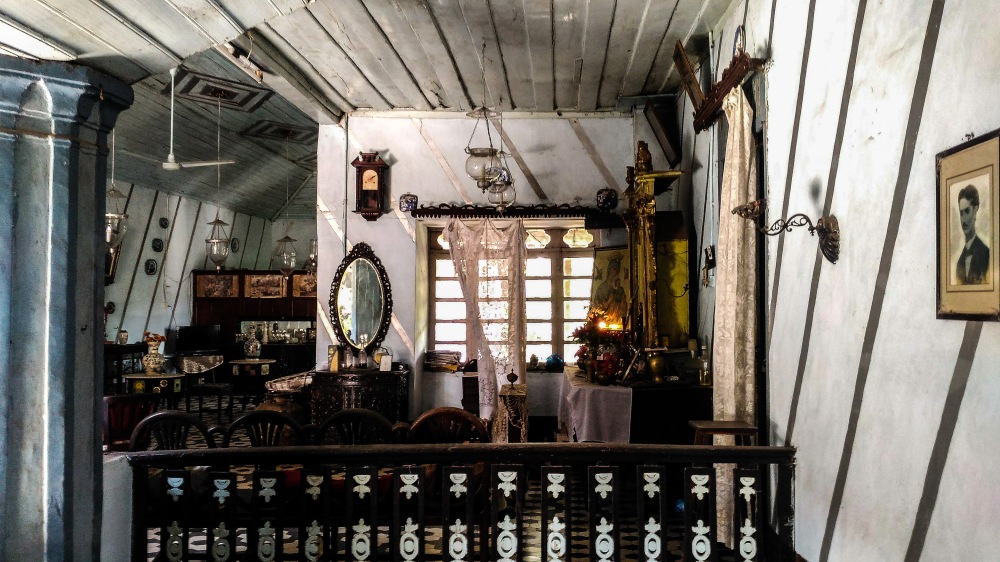 When inside a villa, one goes back in time (Fernandes Heritage House) 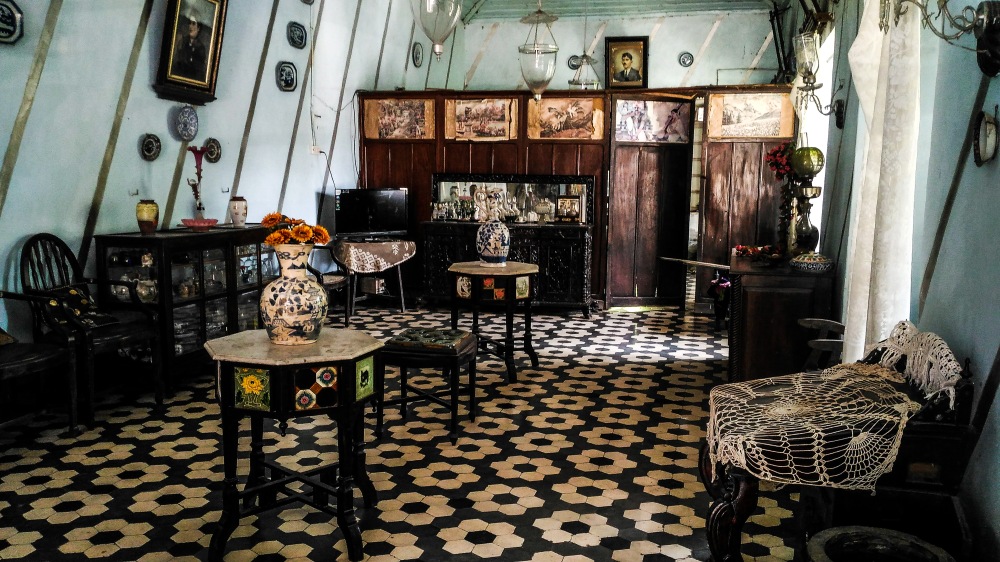 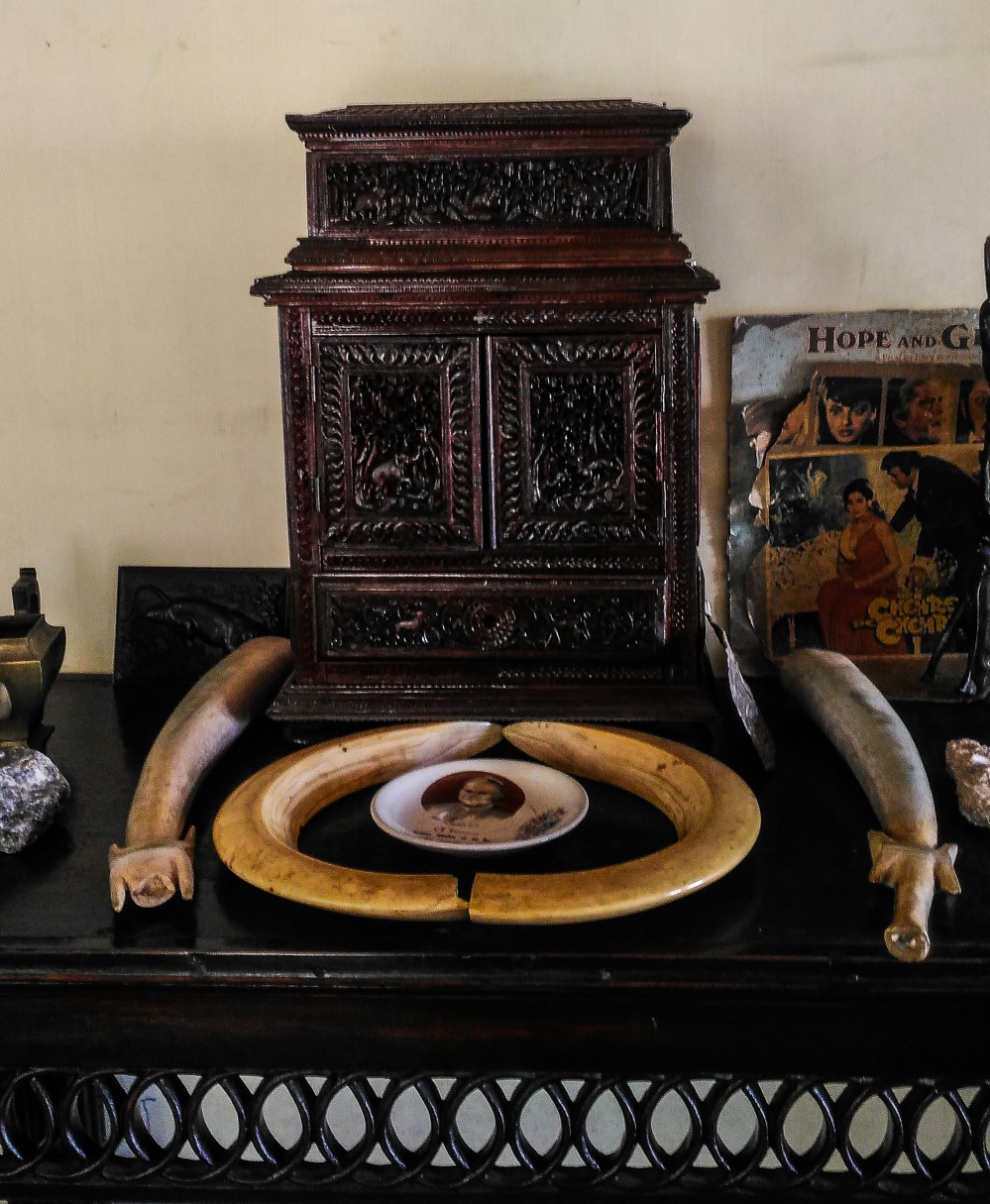 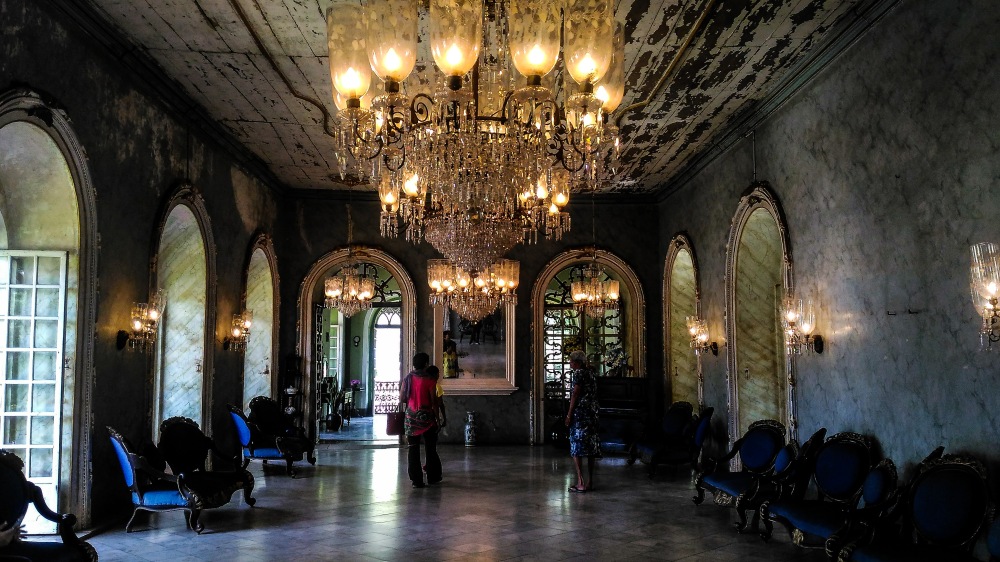 The quiet glamour of an elegant ball room; now echoing with the footsteps of infrequent visitors (Menezes Braganza House)

Chandor, now a quiet idyllic village, hides a great deal of history in its various layers. As one stands at the excavation site and sees the lone headless Nandi standing guard in the middle of a small enclosed field, one can only imagine the grandeur of the cruciform temple that once stood here as a dedication to Lord Shiva. The Portuguese styled mansions, as one sees while walking down the pretty country roads, fare better, and one can have a glimpse into the wealthy lives that the converted Christians once enjoyed under four centuries of Portuguese rule. Exploring Chandor gives one a feeling of nostalgia and of wonder at the immense historical importance that this small town once held and is now lost in the folds of time.

3.”A History of the Inquistion of Spain (volume 3)” by Henry Charles Lea

(This article was published on Virasat E Hind. )