In a serene valley of the long forgotten village of Palampet, amidst vast crop fields, surrounded by wooded hills and a large lake, stands the jewel in the crown of Kakatiyan architecture, the Ramappa group of temples. These temples are filled with sculptures that can easily be counted among the masterpieces of Indian sculptural art, and they create a perfect balance between the two ancient art forms prevalent in India: architecture and sculpture.

When we arrived here on a warm Sunday afternoon, there was nothing to show the past importance of the now tiny, remote village of Palampet. With green fields stretching as far as the horizon and wooded slopes casting dark shadows, there was an air of peace and tranquillity, as we drove towards the temple following the dusty roads that led to it.

A brief look at history:

The Ramappa group of temples were built in 1213 CE, around a huge man-made lake/tank that was built as a water resource to help primarily in irrigation. Situated in the village of Palampet, the temple complex was built by Recharla Rudra, the chief of army during the rule of Ganapatideva. The complex is named after the main architect Ramappa Stapathi,  and is among the few temples that honour the person who designed it. According to an inscription on a slab in a mandapa, the temples were built as a “as part of the Saptasantaras.”

The entire temple complex has the Rudreswara temple (dedicated to Shiva) as the main temple,  a nandimandapa, subsidiary temples (Kateswara and Kameswara) seen at the north and south sides of the Rudreswara  temple, an inscription pillar, and a dharamsala. Surrounding these structures is the prakara that runs round the entire complex.

During the ‘Kakatiyan’ era the temples were not only important places of worship, but these were also seen as “landholder, employer and consumer of goods and services, as bank, school and museum, as hospital and theatre, in short, as a nucleus which gathered around itself all that was best in the arts of civilised existence and regulated them with the humanness born of the spirit of dharma, the medieval Indian temple has few parallels in the annals of mankind” (as P.S. Kanaka Durga wrote in, State and society under the Kakatiyas of Warangal: A critical Appraisal (A.D. 1000- 1323)). [for more on Kakatiyan temples click on this]

Within the temple complex, the Rameswara temple is the only structure that remains relatively undamaged, while the Kateswara temple and the nandi mandap are partly damaged, and the Kameswara temple is completely in ruins. There are ruins of other smaller temples around the lake, but those are unsafe to approach, as the stones look ready to tumble down any moment. As we entered the surviving temples, the intricacy of the sculptures and carvings on the stone panels took our breath away. The 13th century figures carved on stones looked alive, and one almost expects them to breathe and start moving. Frozen for posterity, each of these sculptures had a tale to tell of its own, as they looked down on us with their serene faces and eyes.

Crowds throng the partially destroyed nandi mandapa. The Ramappa group of temples is a functional site, and large crowds paying obeisance to the nandi and Shiva are a common sight here 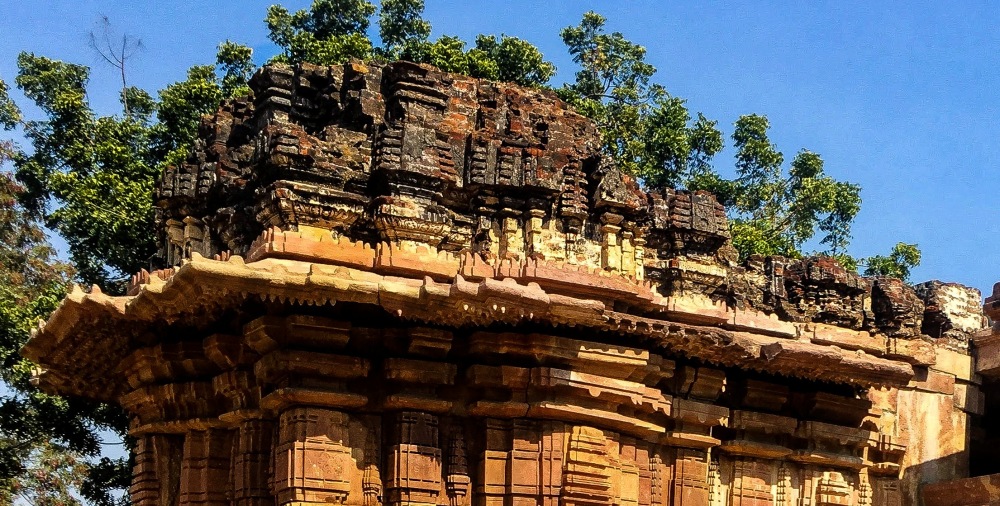 The Ramappa temples, which are of the prefabricated type, is built of red and white tinged sandstone and show beautiful brick shikharas and ardhashikharas in front, keeping in line with the Chalukyan pattern. The special feature of these temples is the use of feather lite spongy bricks that float on water, a man made technological ingenuity of the 13th century. Another innovation seen in these temples is the use of sand- box technology, where the foundation pit was topped with sand that would act as a support or cushion during earthquakes, thus protecting the structures. The garbagriha of the Kateswara temple is a trikuta, commonly seen in many Kakatiyan temples, a style that was earlier developed by the Chalukyans. The 12 bracket figures of the madanikas in the Rameswara temple bring out the best in the Kakatiyan sculptural art, reflecting the skilled artistry of that period that could use chisels on black basalt and carve out exquisite figures in graceful rhythmic poses. These slim, tall, and graceful madanikas along with other female figures inside the temple in varying dance poses became the inspiration for a dance treatise known as Nrityaratnavali that was written by Jayasenapati, a Kakatiyan army general. 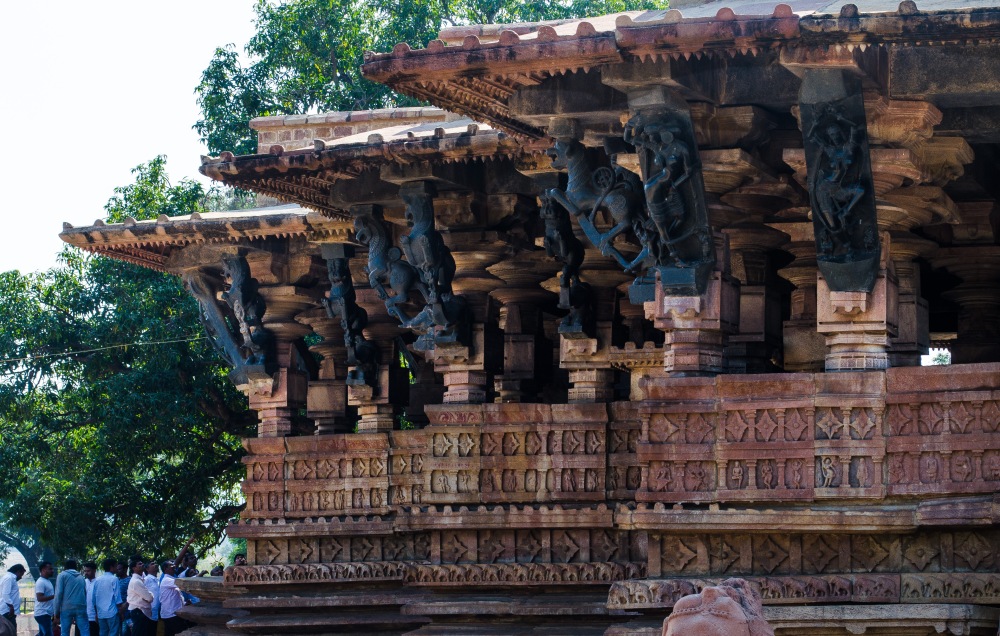 An important difference of the Kakatiyan temples from the Hoysalas is seen in the space that we notice between the mandapa parapet walls and the roof, which allows air and light to come in and doesn’t make the visitor feel claustrophobic. Though like the Hoysalas, the temple plan here is stepped diamond, with three storied niches on three sides of the temple walls, and the topmost band of the base on the stellate platform also shows a frieze of elephants that runs all around the temple (for more on elephants and other such small sculptures on Kakatiyan temples click here)

Three storied niches on the three sides of the temple walls 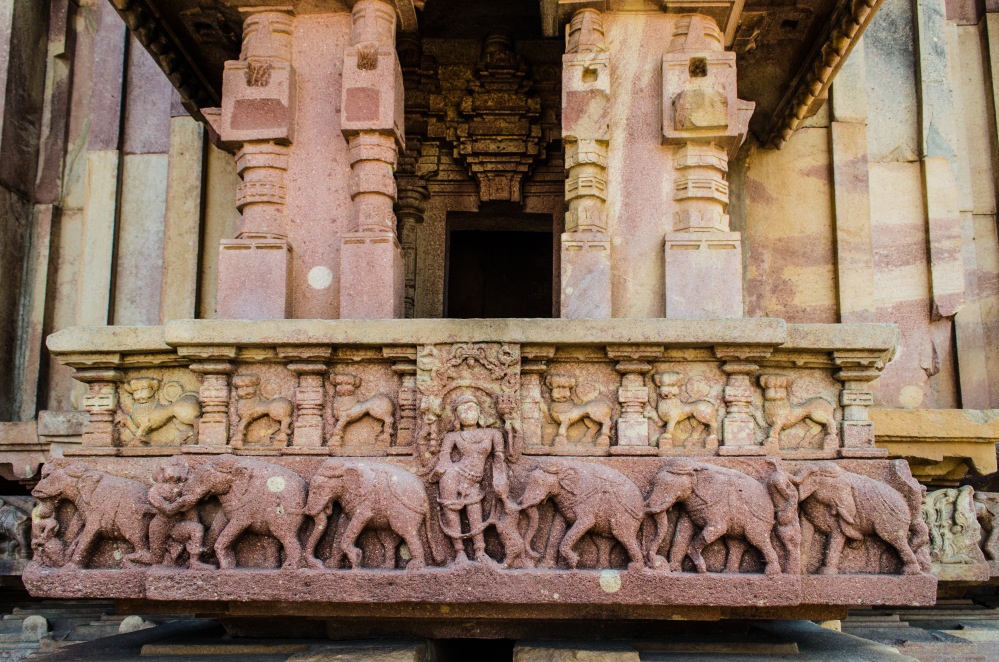 The madanikas or salabhanjikas of the Rameswara temple form an important part of this temple, and one cannot miss these tall, lithe, black bracket figures on pillars, two on each side of the entrances. Unlike the voluptous Hoyala madanikas and the typical beauties of the classical Indian art, these madanikas/salabhanjikas exhibit slim and tall figures in graceful poses; however their faces that have noticeably large eyes, are rather wooden with no emotions. Not all madanikas are dancers; one is a nagini, one is a huntress with a bow and arrow, one is a drummer, and two are jaganmohinis.  Besides the salabhanjikas/madanikas, there are gajasimhas on basalt brackets all around the mandapa that form the royal insignia of the Kakatiyas. 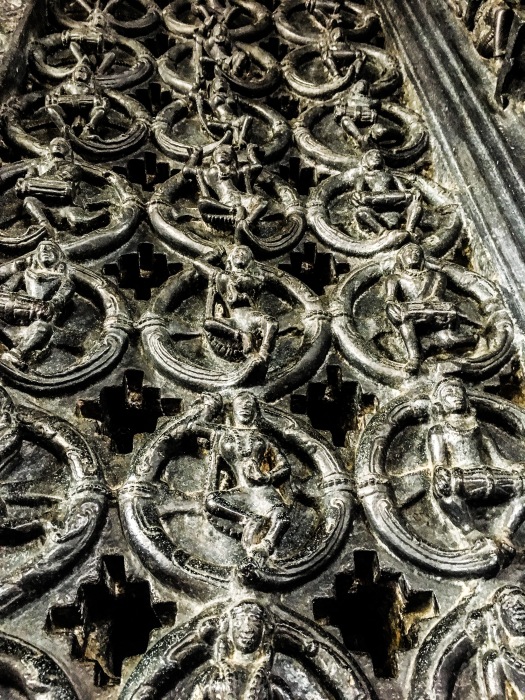 Jaali work on the entrance door to the antarala has circles that are formed by creepers encircling dancers and drummers.

Women in a palm grove, seen at the lower part of the door jamb 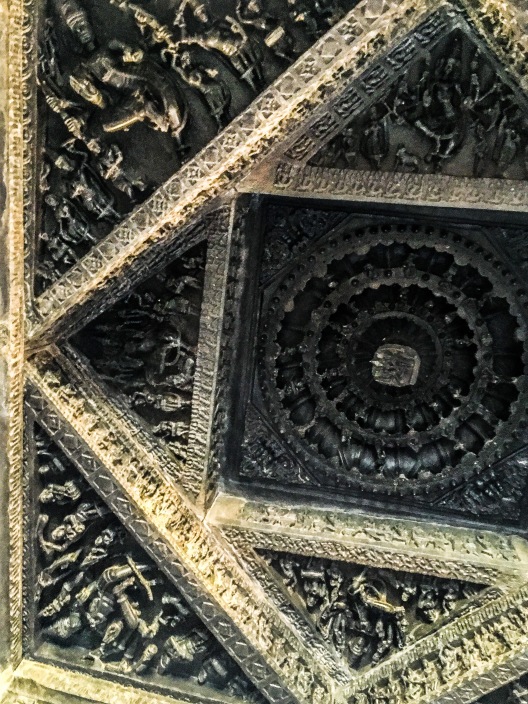 The rangamandapa inside is a circular, raised, single black stone, and has exquisitely carved pillars on four sides with intricately sculpted roof that speaks of various stories, where we see a king standing with a sword while women holding parrots surround him. The different sculptures on pillars and ceilings shows the astadikpalas, and also tell tales of the samudramanthana (the devas are seen with halos while the asuras do not show any), Shiva’s marriage, the killing of Gajasura, Krishna’s vastraharana, and many other tales from the Hindu epics. 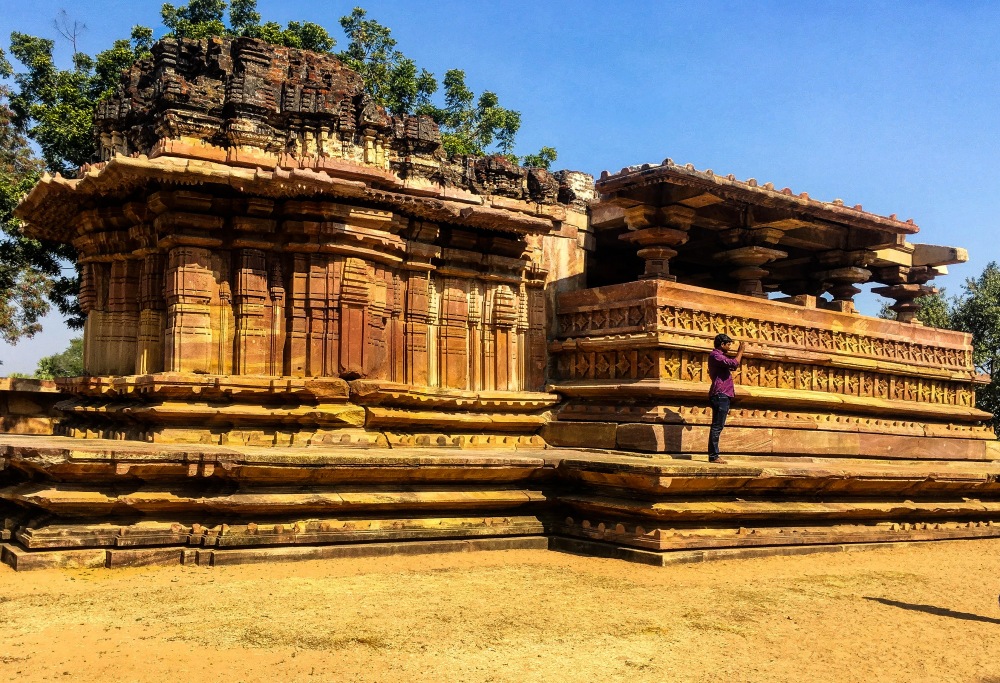 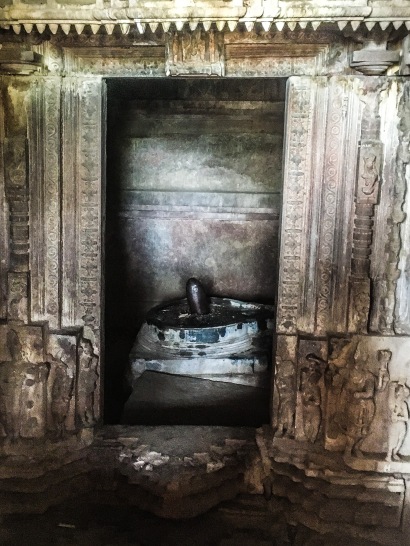 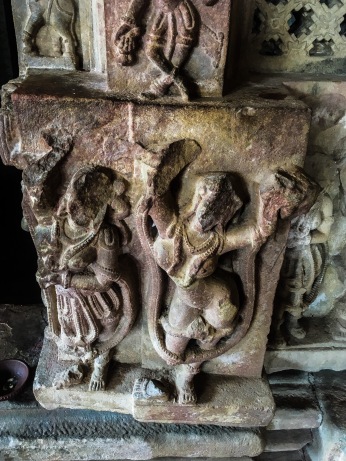 This temple is situated at the north side of the Rameswara temple, and is also constructed with the same reddish white sandstone, has a brick shikhara, with sculptures of dancers in different poses on the pillars and on the door jamb. From their free poses and limb rhythms it can be conjectured that perhaps nritta was more popular an art with the people of that period, than the pure classical nritya. Joy resonates from these frozen figures, and the visitor, as he or she moves around, absorbs this feeling of joy and starts pulsating with the happiness emanating from these 900 years old stone sculptures.

The dancers that we seen in many of the Kakatiyan temples reflect an art that was perhaps once seen by the devotees sitting at leisure around the nrityamandapa, and certainly does not comply with classical dance poses mentioned in our discourses. Each movement that we see here is an expression of pure joy, and their varied rhythms show a disposition to enjoy life to the full. The Kakatiyan era was synonymous with wealth and prosperity of the common people, large-scale developments that included turning forest tracts into fertile farmlands with the help of innumerable large man -made tanks, and prosperous overseas trading with many foreign countries. Thus, the lives of common people were filled with joy and contentment, and it is this feeling that we see reflecting in the sculptures. Almost 1000 years later, when we now see these temple sculptures, we witness a historical documentation, an actual glimpse into a society and its people whose lives once resonated with happiness and prosperity.

How to reach: Palampet is around 77 km from Warangal, and 157 km from Hyderabad, in the state of Telengana. The best way to reach this village is by a car, though there are other local conveyances available too.

Time to visit: December and January are comparatively cooler months, hence the only time to visit for tourists, travellers, and heritage enthusiasts.