It had been a long day of travelling and exploring different Kakatiyan temples in the remote village of Pillalamari in Telengana, and when we finally journeyed towards the Warangal fort it was already late afternoon, and we had just a couple of hours in hand before the fort premises would shut down for the day. Exhausted from the day’s travails, when we reached the fort we noticed with a trifle feeling of disappointment that nothing much remained of the fort walls or gates. However, when we reached the ASI park, which lies in the central part of the fort, we found that what remains for us to see are imposing stone ruins of a medieval temple.  This temple, known as the  Keshava Sri Swambhu temple, was built by the great Kakatiyan ruler Ganapathideva in the 13th century CE, and later destroyed by the army of Muhammad bin Tughlaq in 1323, when the fort finally fell to the Delhi Sultanate, after repeated attempts to capture it. The massive ruins that are now scattered all over the park, tend to overwhelm the viewer with their beauty and splendour. There’s also an ensuing feeling of sadness seeing the waste, with the thought that how grand the temples must have looked in their heyday; more so for us as we gazed at the ruins in the fading light of the setting sun.

From various inscriptions it can be held that Warangal started developing as an outpost during Prola I’s rule (996 CE- 1052 CE), when the Kakatiyas ruled as vassals under the Kalyani Chalukyas with Hanamkonda as their capital. According to some reports a bullock cart had toppled over a stone in Warangal, and in the morning the cart-men discovered that their wheel had turned to gold. King Prola, after being informed of this miracle, came to inspect and found that the stone which had caused the cart to topple and the miracle to happen was a lingam, which was termed as swayambhusiva, meaning a natural lingam not created or installed by humans.  He was advised to build a temple around it (Sambhunigudi), while the place was named Orugallu meaning a fallen cart. Since an ‘orukal’ or a single large rock had caused the accident, the place was also known in Sanskrit as ekopala (derived from orukal) or ekshilanagari.

It was however much later, during Ganpathideva’s rule, that Orugallu gained political importance, when the fort was completed, and the Kakatiyan capital was shifted here from Hanamkonda in 1208 CE. The fort was initially made of mud brick walls, which were changed to stone by Ganapathideva for better protection. However, owing to constant wars with the Yadavas,  Rani Rudramma made further reinforcements by adding thick granite stone layers to the walls,  increasing the height of the fort walls, building three concentric layers of fort walls with bastions and a wide moat, thus turning it into one of the most formidable forts of that time.

From the various broken pieces recovered from the fort temple ruins and from a text named Kreedabhirama, it has been derived that the site was likely to have had three separate temples: Keshava-Sri- Swayambhu; with Vaishnavite panels belonging to the Keshava temple, two of the women panels found likely to belong to the Sri (Lakshmi) temple, while the Shaivite panels were a part of the Swayambhu temple. The ruins are spread across the archaeological park in the fort, while some artefacts are on display in the single roomed museum housed within the Khush Mahal located inside the fort, and some more are kept in the Hyderabad museum. 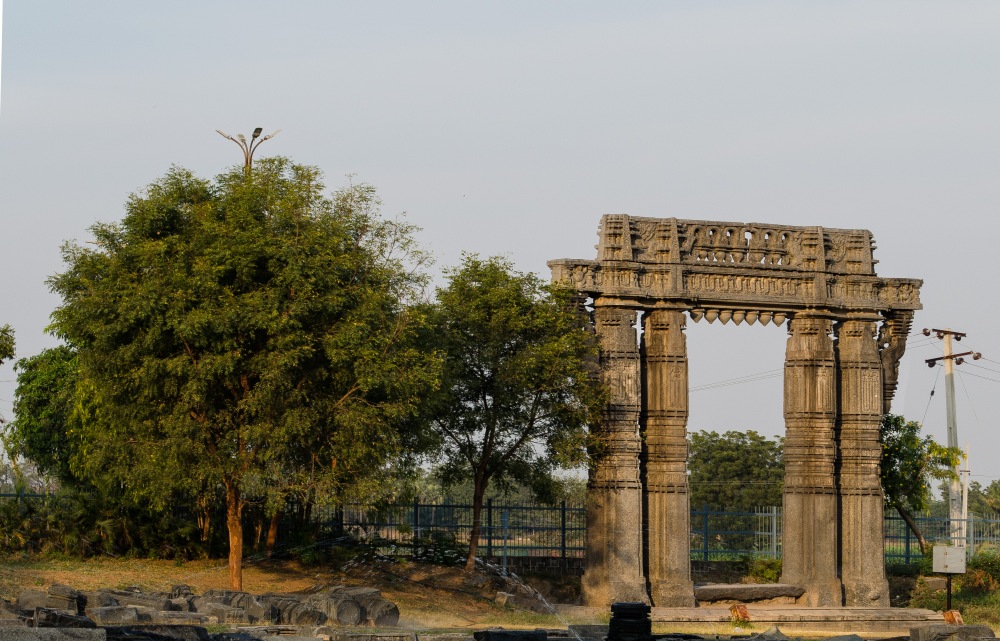 The well known symbol of the state of Telengana: the kala-toranas or gateways that once stood as doors to the temples. Beautiful and imposing, these double pillars support a broad architrave that holds the mythical bird known as annapakshi on either ends. 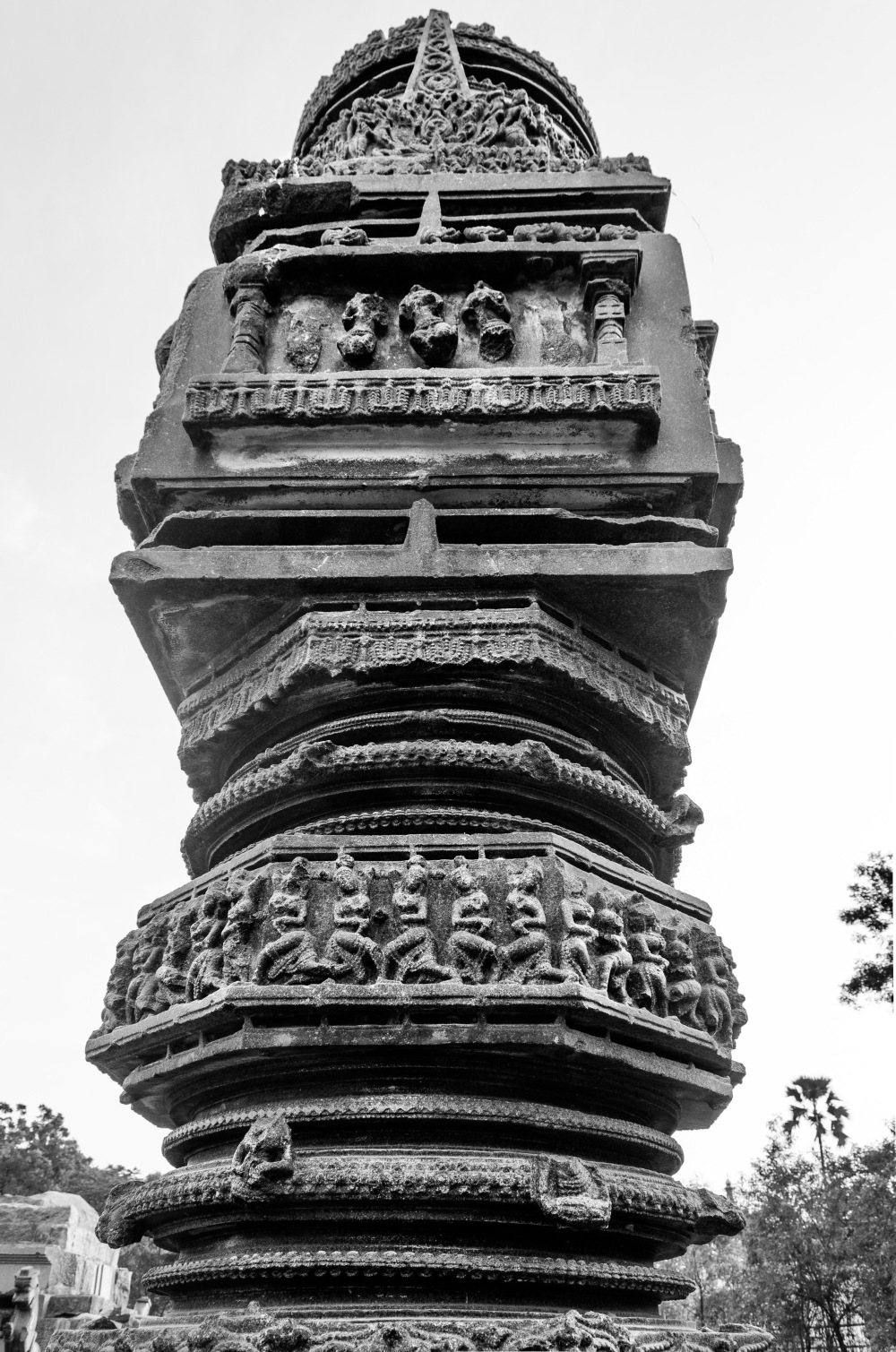 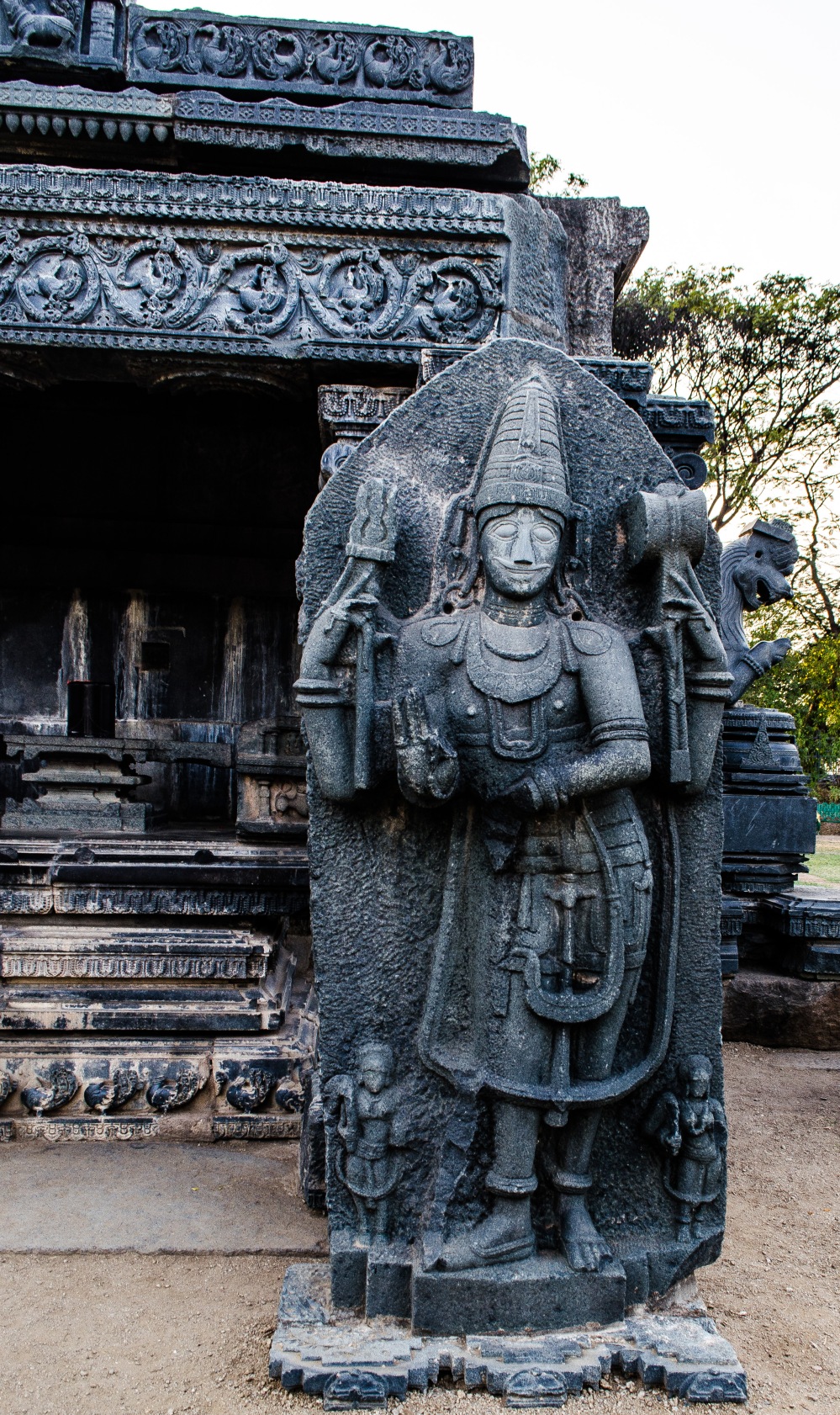 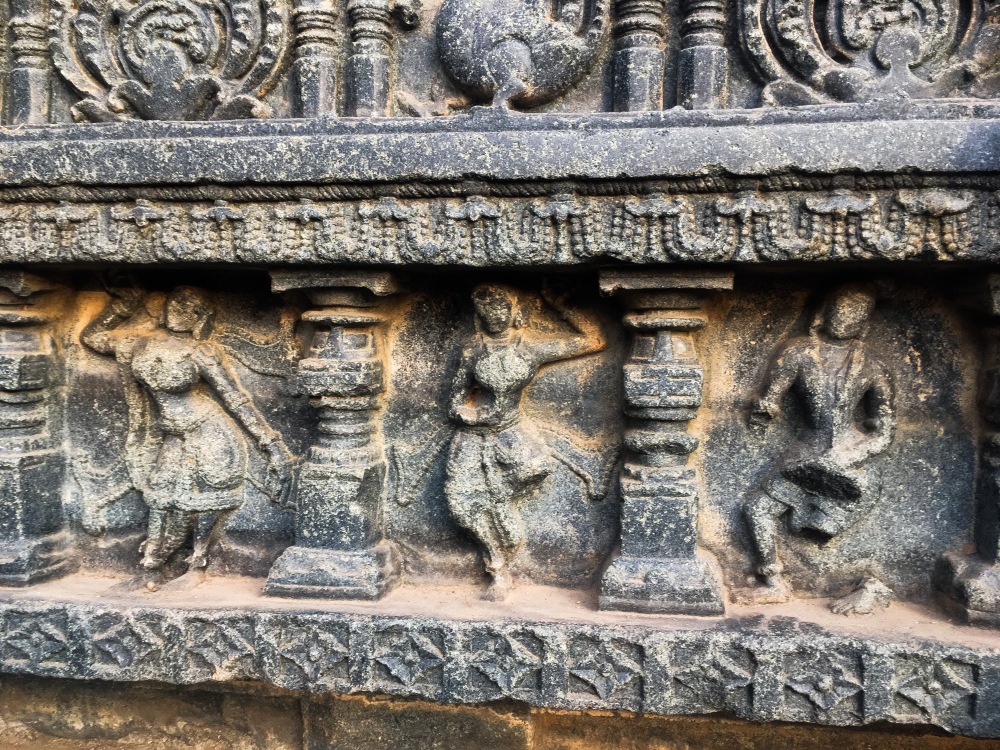 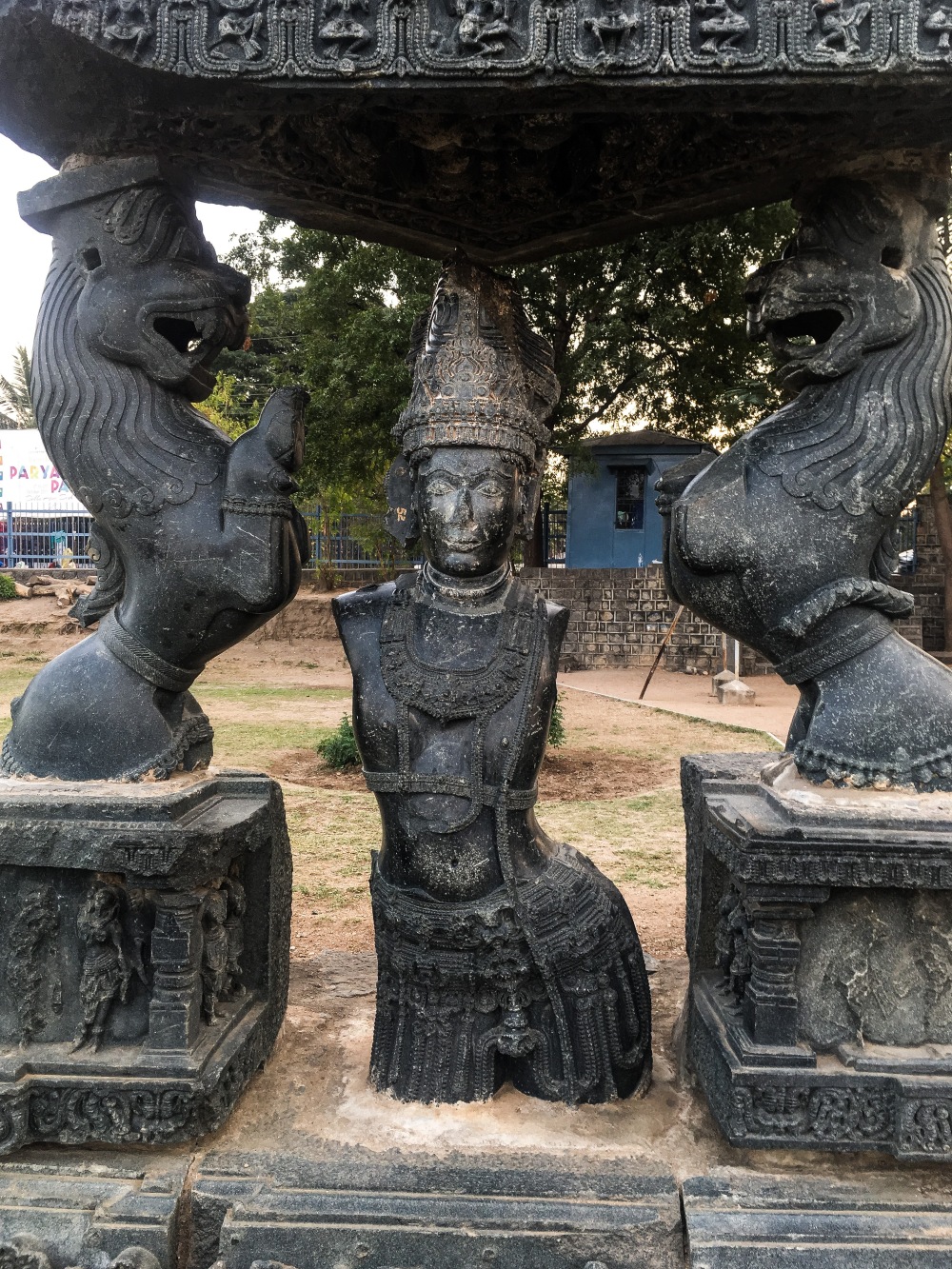 The fort museum in Khush mahal

Artefacts are just kept scattered outside, while some murtis are on display in the room inside. It houses a beautiful decapitated head of a nandi, head of Shiva, Vishnu, some Jain inscription pillars, simha brackets, and few broken door jamb panels with jaalis. 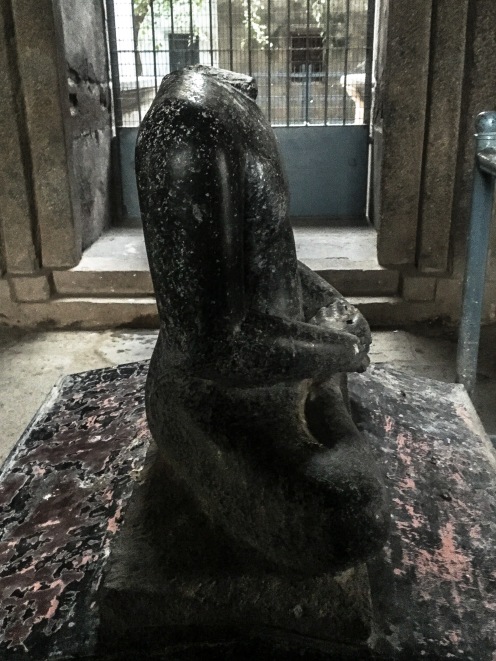 How to reach Warangal fort, and other things to see:

We stayed in Hanamkonda, which is considered the twin city of Warangal. From Hanamkonda the fort is just around half an hour by car. The vehicle takes one straight up to the ASI park gate where the temple ruins are seen. The remains are scattered all over the park and it takes one or two hours to see the pieces in details.  If one is interested in seeing more temple artefacts that are kept in the Khush Mahal, it’s just a short walk from the park gates. The mahal, built after the fall of the fort, is rectangular in shape, has large sloping walls, with six arches that act as openings to this single celled structure. There are stairs that lead to the top of the mahal, and one can get an aerial view of the entire fort or what remains of it.

Given below is a map that shows the other interesting historically important places in Hanamkonda. Thousand pillar temple, Padmaskhi temple, and Bhadrakali temple, are all of Kakatiyan era, and each one is an architectural masterpiece, and a must visit for all heritage enthusiasts and history lovers. Best time to visit Telengana is during winter, in December or January. Local food is spicy but quite tasty, and a must try.