The Imperial Cholas of South India hold the record for being the longest ruling dynasty in Indian history, and is undoubtedly one of the grandest empires that the country has ever seen. Historically their rule goes long back into the pre-Christian era, and while there is no exact date of their origin, the dynasty finds a mention in the 13th Ashokan edict (dated 3rd century BCE). Their rule came to end in the 13th century when their arch rival, the Pandyas, assumed control.

The mighty Chola Empire reached its zenith during the 11th to 13th century, when its

territories stretched across Kerala, Tamil Nadu, Andhra Pradesh, and Andamans; while holding sway over the islands of Maldives, Indonesia, Sri lanka, Lakshadweep, parts of Burma, Srivijaya (Sumatra &Java), and the islands in the Eastern Archipelago. Under the rule of their famous king, Rajendra Chola, a victorious Chola army marched to east India up to the banks of the river Ganges in Pataliputra, and defeated king Mahipala of the Pala dynasty.

Besides being mighty warriors and seafarers, the Cholas were also great builders who commissioned many beautiful temples across their kingdom. Keeping alive the Pallava traditions, these monuments stand as a symbol of the power and ingenuity of Cholas and their craftsmen. Some of the Chola era temples are now considered as among the finest examples of south Indian art and architecture.

Historically very little is known about the early Cholas, though there are references of the dynasty in the Sangam literature. Without much information, the early rulers such as Karikala, have now become a part of grand legendary tales. It was only around mid ninth century that Chola dynasty under king Vijayalaya came into historical limelight, and we see the start of the imperial Cholas that fanned out from Tanjore or Thanjavur. Starting with Vijayalaya, the Chola dynasty thereafter ushered in a grand revival of religion and literature in the southern part of India that continued unabated until the 10th c. CE. During the 10th century CE the Cholas went through a weak phase in their rule, when they saw some of their rulers killed in different wars, an assassination, and seizing of power by the Rashtrakuta ruler, Krishna III, who took over Tondai-mandalam.  Finally in 985 CE, Rajaraja I came to power and under him the Chola dynasty rose to heights never achieved before. Titled as Rajakesari Arumolivarman, Rajaraja I (985-1014 CE) is considered as the most powerful Chola king, and during the three decades of his rule the Cholas established themselves as a formidable and powerful empire. Rajaraja I remains unmatched in his war triumphs (across India and foreign nations), administrative skills, as a lover of of art and literature, and religious tolerance. Rajaraja I was succeeded by Rajendra I (1012-44 CE), who was as brilliant as his father. Based on the foundations made by his father, Rajendra I further raised the Chola empire to a level where the dynasty was seen as the most extensive, influential Hindu kingdom of that time.

By the turn of the 9th century Shaivism was the dominant religion of the Chola empire. Started by Parantaka I (an early Chola ruler), the Shaiva theology was further reinforced by Rajaraja I and Rajendra I. As a result we see the frenzied building of many Shiva temples in Dravida style architecture, and an attainment of lofty levels in paintings, bronzes, and sculptures, which were expressions of great devotion. The Chola centres of religion and learning were mostly centred around Thanjavur, Gangaikondacholapuram, and Darasuram. After a succession of many good rulers, the two last great Chola rulers were Rajadhiraja (1166-1180 CE), and Kulottunga III (1178-1218 CE). Kulottunga III made great efforts towards stemming the decay that had slowly started affecting the once great Chola empire. He was also a prolific builder, which is seen by his various additions to  the Chola monuments, as seen in the Kampaharesvara temple at Tribhuvanam, and also in other temples at Madurai, Kanchipuram, Tiruvidaimarudur, Chidambaram, and Darasuram.

The Airavatesvara temple at Darasuram was built by Rajaraja II (1143-1173 CE.), and it stands third in line after the two Brihadisvara temples at Thanjavur and Gangaikondacholapuram, when compared to the grandeur of the vimanas of these three Imperial Chola structures.  Despite being smaller than the other two, Airavatesvara temple has some sculptural masterpieces that makes it stand as an exemplification of the great heights achieved by the Cholas in the field of art, sculpture, and architecture.

Airavatesvara, the name of the temple is believed to have been derived from Airavat, Indra’s elephant, who had prayed in this temple. Airavat was a white elephant who had turned black owing to a curse by rishi Durvasa. It is here after praying and bathing in the temple tank that Airavat regained his lost colour. According to another story, Yama (the god of death) was cursed by a rishi that made him suffer from a constant burning sensation. He got rid of this curse by praying here and taking a bath in the temple tank, which is known as Yama Teertha.

Airavateswara temple has a sanctum sans the circumambulatory path with a front hall or agra-mandapam. As per the pillar inscriptions in the mandapa, this hall is known as the svasti sri- rajagambhiran tirumandapam. This agra-mandapa is unique, as it had been designed as a chariot on wheels; specifically the Tripurantaka ratha, complete with wheels, spokes, and hubs (in relief), pulled by leaping horses. The mandapa pillars show ornamentation depicting stories from the epics. Another interesting feature of this temple are the miniature panels with inscriptions that tell stories associated with the 63 Nayanmars (Shaiva saints), showing the Chola connect with Shaivism. There is a separate temple for the devi (Devanayaki amman shrine), which is dated little later than the main temple; thus, showing that the growing popularity of an Amman shrine as an integral part of a Dravidian temple was a development of a slightly later period.

As one enters the Airavatesvara temple, one sees a large gopura whose upper part stands completely destroyed. However, its grandeur can be imagined from the relatively smaller gopura that stands inside and remains completely preserved. It is believed that

the temple once held seven such walled tiers that were subsequently destroyed during invasions by the Delhi Sultanate armies, led by Malik Kafur (1311 CE),  Khusrau Khan (1314 CE), and Muhammad bin Tughlaq (1327 CE), the remnants of which are still visible in bits and parts from the scattered ruins around (Howard, 2012, pp. 93-94). The prakara wall that runs around the temple has beautifully sculpted couchant bulls. Like the broken gopuram, the smaller one too show pillars in a row decorated with pretty ganas, apsaras, and other motifs. In front of  the smaller gopura is a bali-pitha showing beautiful carvings of lotus petals. In front of is a large nandi mandapam. The bali peetha is believed to have musical stairs, keeping in tune with the sculpted panels seen all over the temple that are adorned with miniature dancing figures. Music and dance form the basic theme of this temple’s ornamentation: a state of constant joy and entertainment. 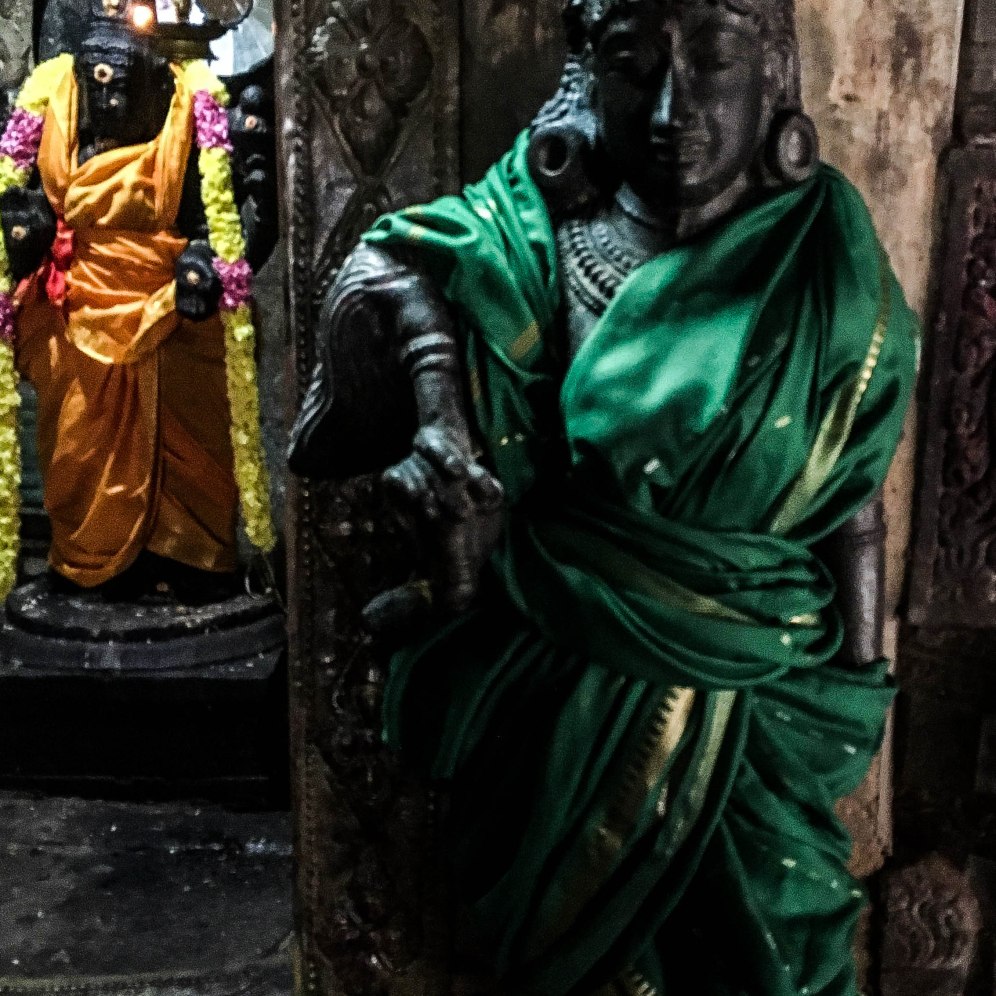 Seen here are two sanctums: the main sanctum at a distance holding the lingam, and a second subsidiary shrine within the nritya-mandapa which holds the murti of Perinayaki Amman 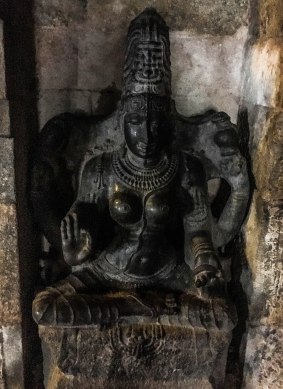 In the second mandapa, which comes after the nritya mandapa, there are four niches at the side of doorway. In the first one we see a devi with a lotus and kalasha (an inscription says she’s devi Ganga; however there are various arguments that say she could be Annapurna or Bhuvaneshwari or Mohini). In the second one stands Nandikesvara with hands folded, the third one holds bhakt Kannappa with his bow and leather sandals, and the last one has a seated Saraswati. 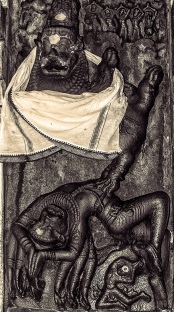 An interesting shrine in this temple is that of Shiva as Sarabha- murti. The shrine is separately attached to the southern wall of the mandapa, and it represents a period in history when Shaivism was more popular than Vaishnavism, which is reflected through the symbolic murti of Sarabhesvara (Shiva) where he is shown subduing the fierce Narasimha (Vishnu). There is a line of thought that believes the cult worship of Sarabesvara might have originated from this temple.

The temple has some exquisite panels of miniature sculptures, and some of them are just about the size of a human hand. These panels depict various interesting scenes from daily lives, like dance poses, yoga poses, a pregnant woman giving birth with the help of other women, war scenes, stories of the Saiva saints, etc

Airavatesvara temple is beautiful in its unique architecture and sculptures, and stands as a symbol of Chola pride and glory. It will take nearly two to three hours for a thorough look at all the sculptures both inside and outside. Beside it, in a separate enclosure is the Amman temple, which is a must visit too. The best time to visit this place is during November to January, when weather is relatively cooler. The best way to visit it is to take a taxi or a car from Tanjore or Chidambaram. The temple sanctum remains closed from 12 pm to 4 pm, and one must keep that in mind while visiting the temple.