The Lost Glory of the city of Gangaikondacholapuram

The beautiful temple known as Brihadisvara Gangaikondacholesvara in Gangaikondacholapuram stands tall, proudly proclaiming the 11th century victorious march of the Chola army up to the banks of the Ganga, where they defeated king Mahipala of the Pala dynasty. While the city and the mighty emperor’s palace are now in ruins in Ulkottai, the main temple still stands about 1.5 km away from the city remains. Amidst the scattered ruins, a mound popularly referred to as Maligaimedu (palace mound), has been a popular site for many centuries for availing free bricks to build village houses. The palace and the city of Gangaikondacholapuram were built between 1023 CE and 1029 CE, while the temple was consecrated in 1035 CE. Gangaikondacholapuram was the capital city of the Cholas and was their administrative centre until the middle of 13th c. CE. After the decline of the Cholas in the second half of the 13th c. CE, Gangaikondacholapuram went to the Pandyas, later followed by the Vijayanagara empire. The city and the temples (the temple Brihadisvara Gangaikondacholesvara was built based on Tamil Vastu and Agama Sastra texts, hence had many more temples and other structures within the complex) later faced massive destruction in the hands of the marauding Delhi Sultanate armies under Malik Kafur in 1311 and Muhammed Bin Tughluq in 1327, followed by raids by the different Deccan Sultanate armies (Malik, 2008, p. 140; Michell, 1988, pp. 89-91). Further vandalism occurred in the 18th c. CE, when English and French led soldiers conquered this region. The colonial armies used the temple premises as a fort, owing to which the structure faced further damages. Reports of a 1855 publication speaks of dismantling of structures from the outer temple wall by colonial rulers in order to build a barrage, despite protests from the local people (Ramaswamy, 1971, pp. 36-37) The fort like walls/bastions that we see outside the prakara (temple walls) on the western side were build for protection during the colonial wars. The temple complex that we see today has been largely repaired and rebuilt in different phases by the Pandyan and Vijayanagara dynasties, British archaeologists, and the ASI.

There is a large tank built by Rajendra Chola I, which stands in a nearby village known as Tottikulam. Another neighbouring village to the south of the temple is the Vanadipattam, which was renowned for making fireworks for the temple during festivals. The village Meikavalputtur, which lies to the temple’s east, was so called because it was the place for temple guards. The village of Meikavalputtur had the tank used for floating the temple barge during festivals. To the west of the temple lies a water-reservoir in ruins, known as Ponneri

Rajendra Chola I established Gangaikonda Cholapuram as his capital around 1029 CE, and the city remained as Chola capital for the next two and half centuries. According to excavation reports “Gangaikondacholapuram…was a secondary capital of the Cholas for about 250 years. The city seems to have had two fortifications, one inner and the other outer. Excavation conducted at two locations at Maligaimedu revealed the remains of royal palace, built with burnt bricks.The ceilings were covered with flat tiles. The pillars were probably made of polished wood, supported on granite bases. Excavations revealed brick walls about 1.10cm in thickness. On the foundation wall, granite stone pillar bases were embedded at an equal distance of 2 meters. Bone objects with animal figures, ivory carvings, quartz beads, shell bangle pieces and stone objects were found during the excavation. The excavation also yielded celadon ware and porcelain sherds. Both of them are of Chinese origin. This shows the contact of the Chola kingdom with China during 11th  to 12th centuries CE” (Government of Tamilnadu, Department of Archaeology) 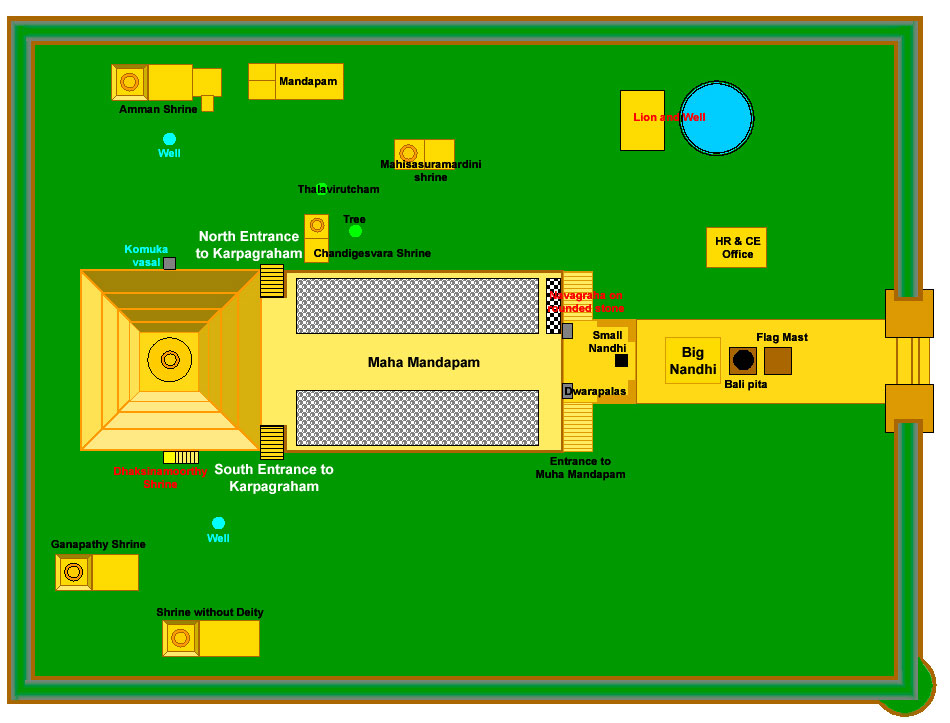 The Brihadisvara Gangaikondacholesvara temple is rectanglar in shape (around 106 m in length and 30 m in width). The temple has a  mukha mandapa, maha-mandapa, ardh mandapa, and a square sanctum or garbhagriha.
There are two flights of stairs on the northern and southern faces that lead up to the huge  dvarapalas, guarding the entrance doors to the closed mandapa. While the plinth of the temple mandapas is a part of the original construction, the temple walls have been renovated. Temple pillars and platform were also added later (Photo from the internet).

Gangaikondacholapuram show similar, though lesser sculptures than the Thanjavur temple. There are representations of kings and princes as warriors holding swords and shields. The two devis Lakshmi and Saraswati are present in the side niches of the entryway to ardha mandapa on the northern and southern side respectively. The opposite niches on the entryway to the ardhamandapa hold Bhikshatana-murti and Chandesanugraha-murti on the northern and southern side respectively. On the southern wall we see Ganesha; Ardhanarisvara with nandi; and a dancing Nataraja along with Hari-Hara, Kali, and Bhringi, while Araikkalammaiyar plays the cymbals. On the two sides of this particular niche we see Vishnu playing the drum, Ganesha and Kartikeya on their vahanas, while Parvati watching the show with her arm resting on nandi. The west wall holds Gangadhara in the act of appeasing a sulking Parvati. On the side of this niche there are carvings that tell the story of Bhagiratha’s penance. Other figures on the west wall are that of Lingodbhava, Vishnu with Sri-devi and Bhu-devi, Kartikeya, and Shiva with Uma.  The northern wall has figures of Kalantaka, eight-armed Mahisasuramardini, Brahma with Savitri and Saraswati, eight-armed Bhairava, and Madanantaka.  The niches here are patterned much the same way as in Thanjavur, where there is a large central niche with two smaller niches on each side projecting out of the wall, with the typical Chola styled kumbha-panjara patterns between niches. The roof shows tiers in the form of sala, koshtha, and kudu. The eaves of the lowest niches have ganas and simhas as brackets. The main niche on each wall holds the trio: Shiva, Vishnu, and Brahma. Thus, we see Dakshinamurti on the south wall niche, Vishnu with consorts on the western wall niche, and Brahma with consorts on northern wall niche. The niche decorations are the same as in Thanjavur. 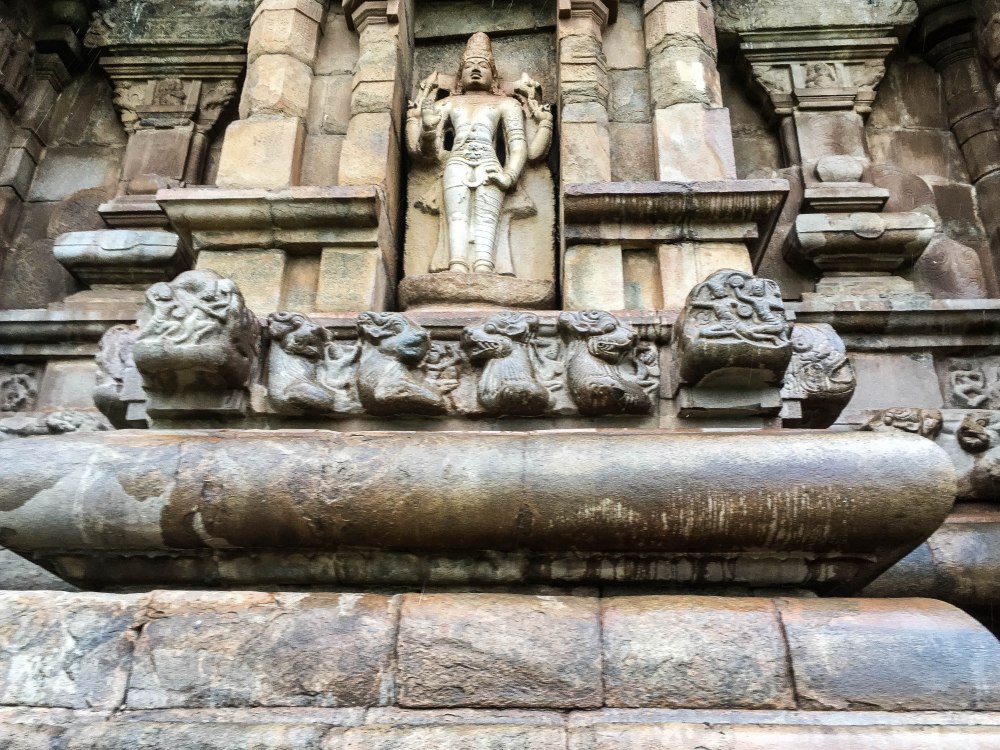 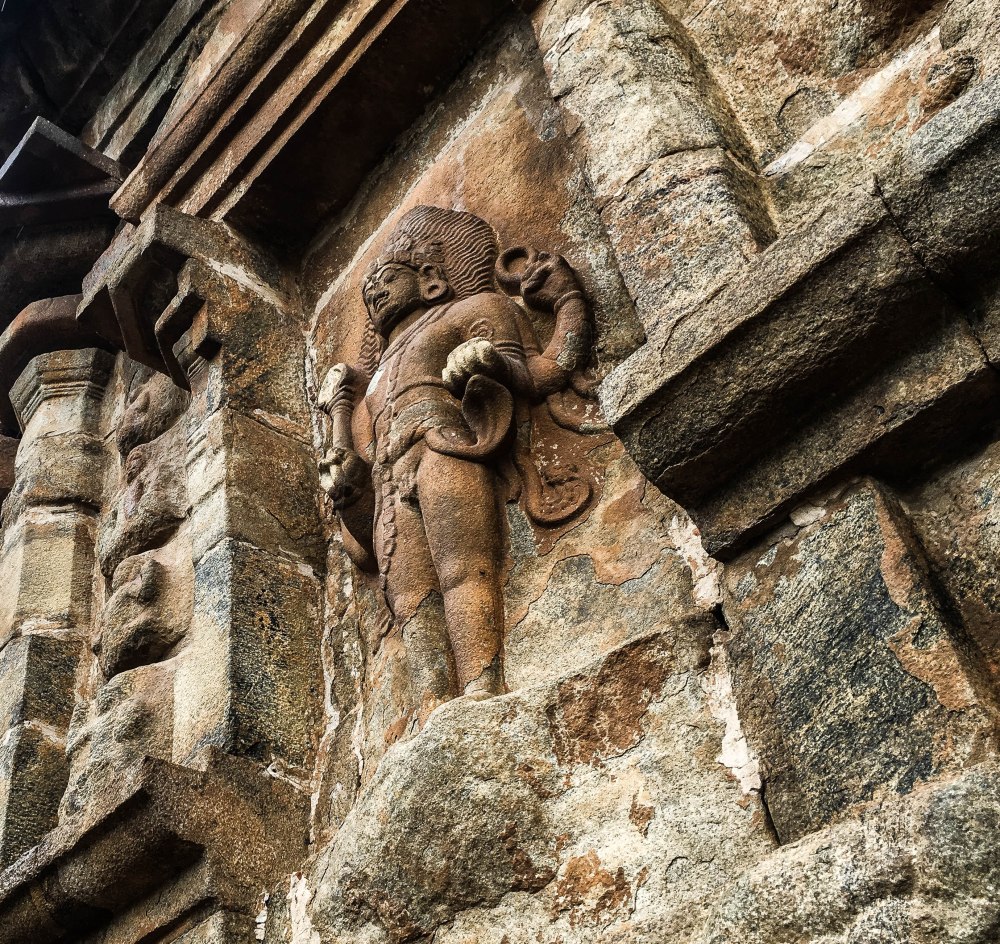 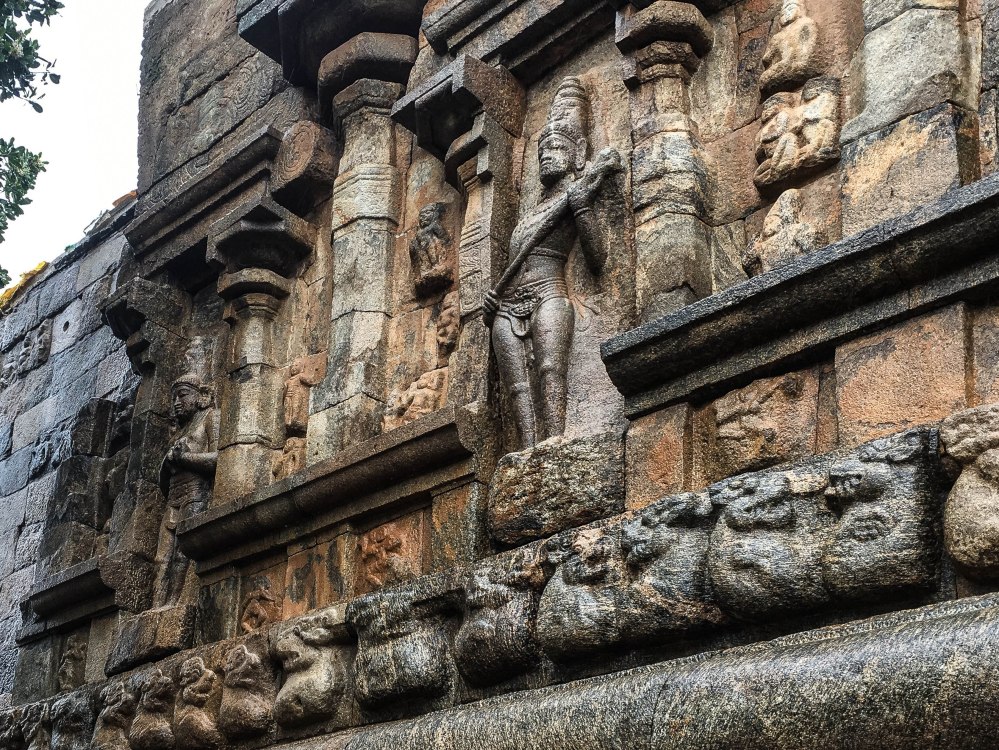 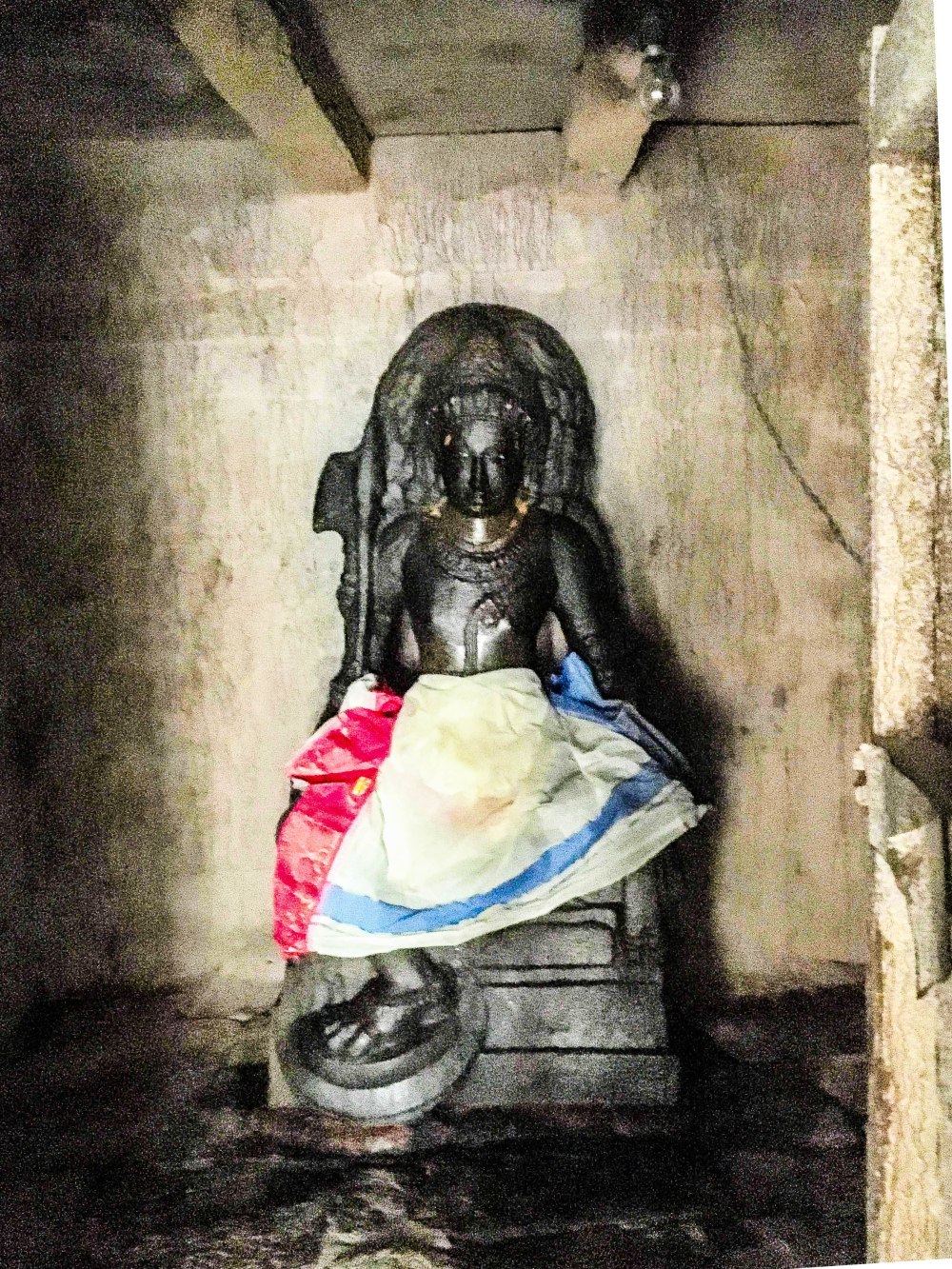 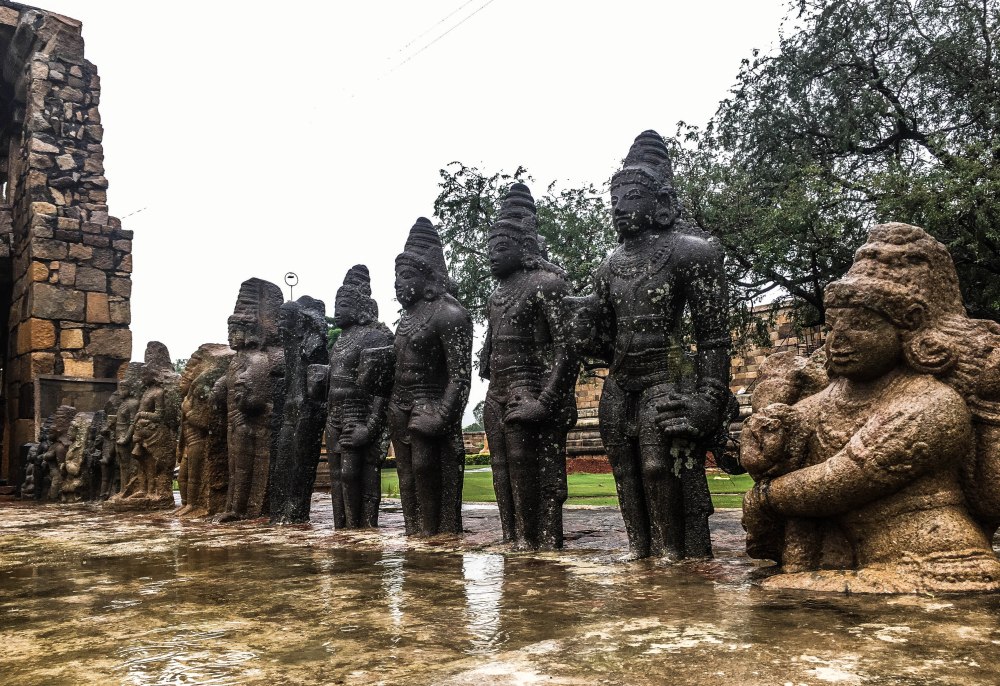 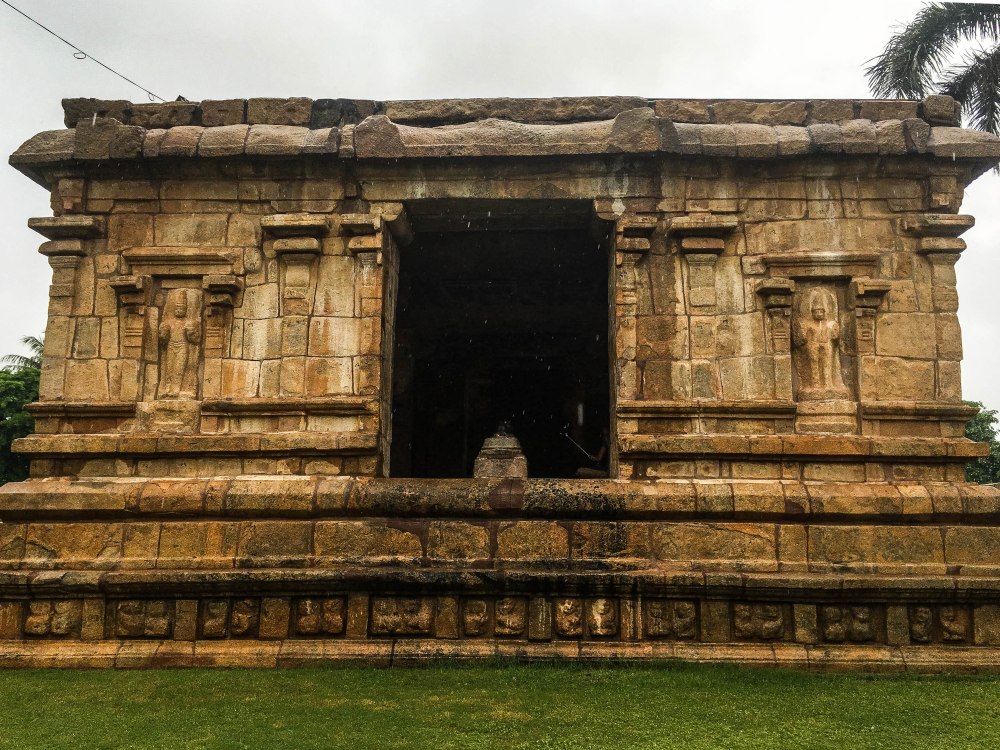 The temple-base has many inscriptions, and the 12 complete inscriptions that have been  deciphered do not relate to Rajendra Chola. The longest inscription belongs to Virarajendra Chola, a son of Rajendra Chola, and gives details of land grants in villages, the revenue of which went towards temple maintenance. Two more inscriptions are of Rajadhiraja I, who succeeded Rajendra Chola, and also talk of land grants. These two are of importance, as they give the names of different divisions under the Chola empire, and also carries the names of administrative officers along with names of different temples, tanks, irrigation canals, and cremation grounds, thus providing a comprehensive history of that time. Other inscriptions are from the Pandyan reign, and mentions Kulottunga I and III, while another one mentions the Pandya king Jatavarman Sundara Pandya, who started a puja ritual in the temple which was named as Sundara Pandya sandhi. Another inscription mentions Prauda Virupaksha, of the Vijayanagara dynasty.

A rather unique point of this temple is the fact that it holds a slab that shows the navagrahas (nine planets), which is a combination of north and south Indian astrological elements. A form of solar pedestal (Saura Pitha) it has in its two tiers an open lotus on a square base. The upper tier bears the eight grahas or planets, and with Surya/Sun at the middle it forms the navagrahas. The lower tier is a chariot drawn by seven horses, with Aruna as the charioteer.

Gangaikondacholapuram is close to Thanjavur and the place can be visited on a short day trip from there. The temple will take around two hours for a through look at everything. The best time to visit the place is between November to January, when the weather is cooler. The temple mandapa and sanctum remain closed from 12 pm to 4 pm and the visit must be planned accordingly. The temple is under the ASI purview.

Michell, G., 1988. The Hindu Temple: An Introduction to Its Meaning and Forms, Chicago: University of Chicago Press.